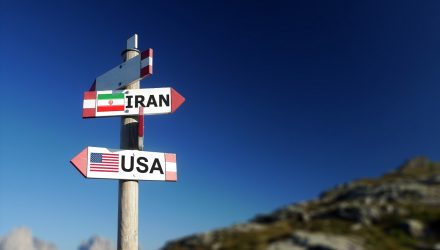 Oil and gas ETFs surged on Monday after the White House announced an end to waivers for countries on importing Iran oil, setting the stage to shutter out one avenue of global crude supplies.

Fueling the rally in the energy sector, a squeeze in global crude supplies lifted oil prices on Monday. President Donald Trump previously withdrew from a 2015 Iran nuclear deal that he argued was not working and announced another round of sanctions that prohibited countries from importing Iranian oil, the Wall Street Journal reports.

However, Trump did provide eight countries, including China and India, a 180-day waiver to continue to acquire Iranian exports despite the sanctions. While the deadline for renewing the waiver was set for May 2, the White House stated waivers are now completely ending and Iranian exports should fall to zero.

“Maximum pressure on the Iranian regime means maximum pressure. That’s why the U.S. will not issue any exceptions to Iranian oil importers,” Secretary of State Mike Pompeo said in a Twitter posting Monday. “The global oil market remains well-supplied. We’re confident it will remain stable as jurisdictions transition away from Iranian crude.”

Saudi Arabia and the United Arab Emirates should pick up the slack and increase crude-oil output as an offset to keep global oil markets supplied.

Nevertheless, analysts argue that Monday’s announcement from the White House will help keep the elevated crude oil prices in place.

“This just puts more upward pressure on oil prices,” Peter Cardillo, chief market economist at Spartan Capital, told the WSJ. “And while there will be ample pressure from the White House for OPEC and non-OPEC countries to increase production, I don’t think this is going to cause a reversal in the market in terms of sentiment.”