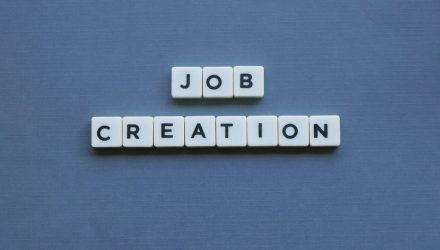 It is important to note that this is based solely on organic growth, not growth created by mergers and acquisitions, as major acquisitions were excluded from the data sets.

Job Growth, by the Numbers

Amazon (Nasdaq: AMZN) continues to be the largest employer of the S&P 500 Index, employing over 1,289,000 people per its fourth quarter earnings report (not including temporary personnel and contractors).

With year-over-year growth of 63%, it creates the most jobs of any company in the S&P 500.

Bezos’s vision and the entrepreneurial culture he has created at Amazon has allowed it to be an industry innovator and create disruptions in every area it has pursued. Amazon’s market cap is $1.64 trillion.

The ERShares Entrepreneurs ETF (ENTR), which tracks entrepreneurial stocks, holds 6.2% of its portfolio in Amazon.

As of its last quarter earnings, the organization employed roughly 140,000 people, creating more than 16,000 jobs in the first quarter of 2021.

ENTR holds 6.8% of its portfolio in Alphabet.

In a report by CNBC published at the time of this data, five of the companies in the top 10 highest paying salaries were ER30 companies.

Meaning, not only are entrepreneurial companies driving growth, they are also doing it with a higher paid workforce, creating economic growth on several levels.

“Through innovation and dedication, entrepreneurs have succeeded time and again in creating wealth through their fast growth and providing employment opportunities while raising salaries at the same time, thus, benefiting the economy,” wrote the paper’s authors.