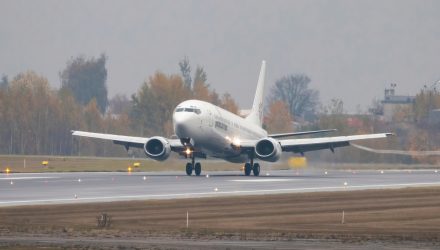 Under the Wing of the Airline Sector

In an earlier note, we briefly mentioned strong consumer demand in travel, which hasn’t yet been reflected in stock prices due to concerns of higher cost pressures. Although airlines currently make up only 16.2% index weight of the S-Network Global Travel Index (TRAVEL), airlines are one of the most visible, data-driven indicators of the broader travel industry. This note examines two of the largest costs for airlines—labor and fuel—which together comprise over 50-70% of total expenses for U.S. airlines, and how airlines adapt to these higher costs.

Labor costs are typically the highest cost item for airlines at approximately 25-40% of total costs. Airlines have little flexibility in wages since employees are largely unionized and have the collective bargaining power to set prices. (1) Most U.S. airlines have reported that 80 to 85% of their employees are unionized. The only outlier is Delta, which has around 20% of its employees represented by unions.

During 2020, airline companies laid off workers and encouraged early retirement to match the decrease in demand, but since then have been scrambling to hire back and maintain staffing. This contributed to capacity issues, including cancellations and delayed flights. Most airlines are now at staffing levels closer to historical levels, but many employees are new to the job or still in training, meaning efficiency hasn’t been fully realized yet. While overall numbers are improving, pilots are still in demand. After many pilots retired early during the pandemic, airlines have still been looking to hire in these already difficult-to-fill roles, so wages could continue to increase to attract talent. Before 2013, pilots only needed 250 flying hours to attain their license. That requirement has been increased to 1,500 hours, so a pilot may take several years to hire. Also, the FAA implements a mandatory retirement age for pilots. The current age is 65 (raised from 60 in 2007), but there is currently proposed legislation raising the age limit to 67. Recently, airlines have already announced more aggressive hiring plans and pay scales for pilots. Southwest, for example, plans to hire 1,000 pilots this year and another 2,200 next year. United Airlines has already offered their pilots a 14% pay raise within 18 months, and in response, American Airlines has stated that they would pay their pilots 17% more by 2025. (2)

Fuel costs are typically the second largest expense for airlines, and ranges are extremely variable depending on energy prices. With higher energy prices this year, jet fuel prices have increased significantly and are now at most airlines’ highest cost per gallon since 2012. Fuel now makes up a higher percentage of total expenses than wages in 2Q22 for four out of the five airlines. Airlines manage fuel costs in different ways. Some airlines use fuel derivative contracts to lock-in prices as “insurance” against rising jet fuel prices. Out of U.S. airlines, Southwest and Alaska currently hedge their fuel costs with derivatives. In 2Q22, Southwest’s fuel hedging helped decrease fuel expenses by $0.63 per gallon (net $0.05 of hedging premiums). In 3Q, hedging is expected to decrease the company’s fuel expenses by $0.44 per gallon net.

Similarly, Alaska’s fuel costs benefitted by $0.44 in 2Q22, leading to a $3.76 economic fuel expense. While Delta does not currently use derivatives, they hedge fuel costs through ownership in an oil refinery, resulting in a $0.31 per gallon benefit in 2Q22. However, hedging can be risky and will not necessarily guarantee lower fuel prices. For instance, Alaska is the only airline that predicts that its 3Q22 fuel costs per gallon will increase from 2Q despite using fuel hedging derivatives. Although high fuel prices are expected to continue throughout 2022, newer aircraft should be more fuel efficient and contribute to cost savings in fuel. Supply chain issues have stalled deliveries from Boeing (B.A.), but most airlines expect larger deliveries in 2023 and 2024.

Travel demand is expected to continue into 2H, but inflationary pressures are also likely to persist. The good news is that airlines have been experiencing less travel disruption and have recently turned profitable again. As airlines continue to manage efficiently through cost issues, positive stock sentiment should return. Although airlines currently make up only 16.2% of the index weight, a boost in airlines’ performance may help support the rest of the broader travel industry.