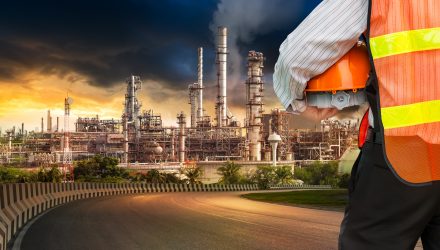 Energy ETFs to Capture the Strength in Oil Refiners

The record U.S. oil production and insufficient pipeline capacity in Canada and West Texas has diminished the cost of oil across many parts of the country, despite the overall rise in crude oil prices, reports Rebecca Elliott for the Wall Street Journal.

Refiners have taken advantage of the distribution hurdles associated with the rapid rise in production. Benchmark crude prices in the U.S. dipped to as much as $11 a barrel below international prices over the second quarter, the widest spread in three years, according to Dow Jones Market Data. The discount on oil sold in Canada and West Texas was even steeper due to regional pipeline bottlenecks.

Consequently, the wider spread between the two prices have helped boost margins for many stand-alone refiners, lifting second-quarter profits to record highs for many refiners, such as Phillips 66 (NYSE: PSX) and Marathon Petroleum (NYSE: MPC). Both companies have seized the current opportunity and operated their facilities at full capacity.

The four largest stand alone refining businesses in the U.S. have generated the highest stock returns among energy companies in the S&P 500 since April 2012 when Phillips 66 spun off as an independent.