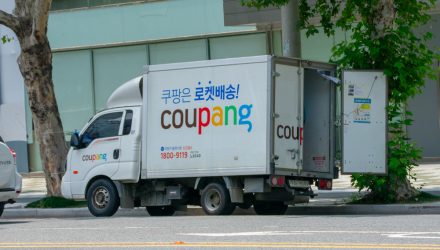 Increased monthly membership fees and improved operational efficiency have led Coupang to raise its earnings forecast for the year and reduce its losses. Bloomberg reported that the South Korean e-commerce giant expects to make a profit before interest, tax, depreciation, and amortization, versus an earlier projection for a $400 million loss.

Second-quarter operating losses for the Seoul-based company were $75 million, down from a loss of $514.9 million the year earlier. Total net revenue grew 12% to $5 billion in the period, while the number of active clients increased 5%.

For years, Coupang has been trying to increase profitability in its core delivery business. Earlier this year, it raised the monthly fee for its “Rocket Wow” service (which is Coupang’s equivalent to Amazon’s Prime membership).

Coupang Founder and CEO Bom Kim said on an earnings conference call that the company expects “benefits to continue to come from greater economies of scale, improved operational excellence, and the growth of higher margin categories and services.”

“But as we’ve stressed, the rate of improvement will not be consistent. As a result, the efforts will materialize unevenly,” Kim added.

While Kim admitted to short-term disruptions due to inflation and fuel costs, Kim said that Coupang will try to achieve long-term targets of 7% to 10% or higher adjusted EBITDA.

Coupang is also looking to commit more resources to both its entertainment and streaming content and its food delivery service. It’s also preparing financial services such as installment loans.

Those looking to invest in Coupang and other internet and e-commerce companies from emerging and frontier markets may want to consider the Next Frontier Internet & Ecommerce ETF (FMQQ). FMQQ seeks to provide investment results that, before fees and expenses, generally correspond to the price and yield performance of the Next Frontier Internet and Ecommerce Index (FMQQetf.com).

The ETF has no China-based holdings. Securities must meet a minimum of a $300 million market cap and pass a liquidity screen that requires a $1 million average daily turnover.

“We believe FMQQ can be an attractive alternative for investors who want to capture the budding opportunities in these ‘next frontier’ markets and/or complement their Chinese tech allocations and balance out their current portfolio weightings,” said Kevin T. Carter, founder and CIO of EMQQ Global.