You are at:Home»Equity ETFs»Dow Climbs Over 200 Points as Trade Wars Fears Ease 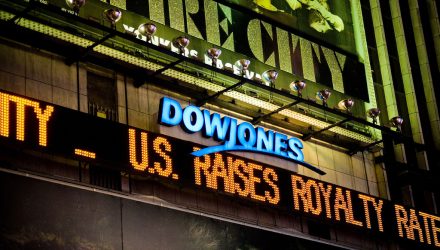 Trade war fears from the tariff-for-tariff tradeoff between the United States and China seemed to ease as the Dow Jones Industrial Average climbed over 200 points as of 11:10 a.m. ET. Helping to lead the rally was homebuilder Caterpillar, which got a tailwind of positive news when the Commerce Department reported that homebuilding grew by 9.2% to 1.282 million units–higher than the expected 1.235 from a Reuters poll.

The housing starts numbers was a positive sign for the housing market, which has largely underperformed the broad market in this extended bull run. According to the National Association of Homebuilders, housing comprises 15 to 18% of the United States’ gross domestic product.

“Permits have clearly faded from the cycle high 1.38 million set in March of this year, and suggest that starts will likely remain rangebound for the rest of the year,” noted Robert Kavcic, a senior economist with BMO Capital Markets. “This is consistent with our view that residential construction looks to be largely a wash on overall economic growth at this stage of the cycle.”

The markets have largely been able to slough off any negative effects of the trade wars. After the close of Monday’s trading session, U.S. President Donald Trump announced he was ready to commence with an imposition of $200 billion worth of tariffs on Chinese goods despite scheduled trade talks with China to ease trade tensions.