You are at:Home»ETF Strategist Channel»The Dollar’s Bull Market is Probably Coming to a Close

The Dollar’s Bull Market is Probably Coming to a Close

In the past few years, we have generally avoided allocations to non-U.S. markets for our asset allocation portfolios due to two primary concerns.

First, the dollar was rising as a result of an improving U.S. economy and policy divergences between the U.S. and the rest of the world.

The Federal Reserve was raising rates and tapering its balance sheet while the majority of the other nations were still adding monetary stimulus.

Second, we have had secular concerns about the stability and attractiveness of foreign investing in a world where the U.S. is seemingly reducing its hegemonic role.

This quarter we have added foreign allocations into our portfolios. The primary reason is that we believe the dollar’s bull market is probably coming to a close. On a relative valuation basis, the dollar has become rather expensive. 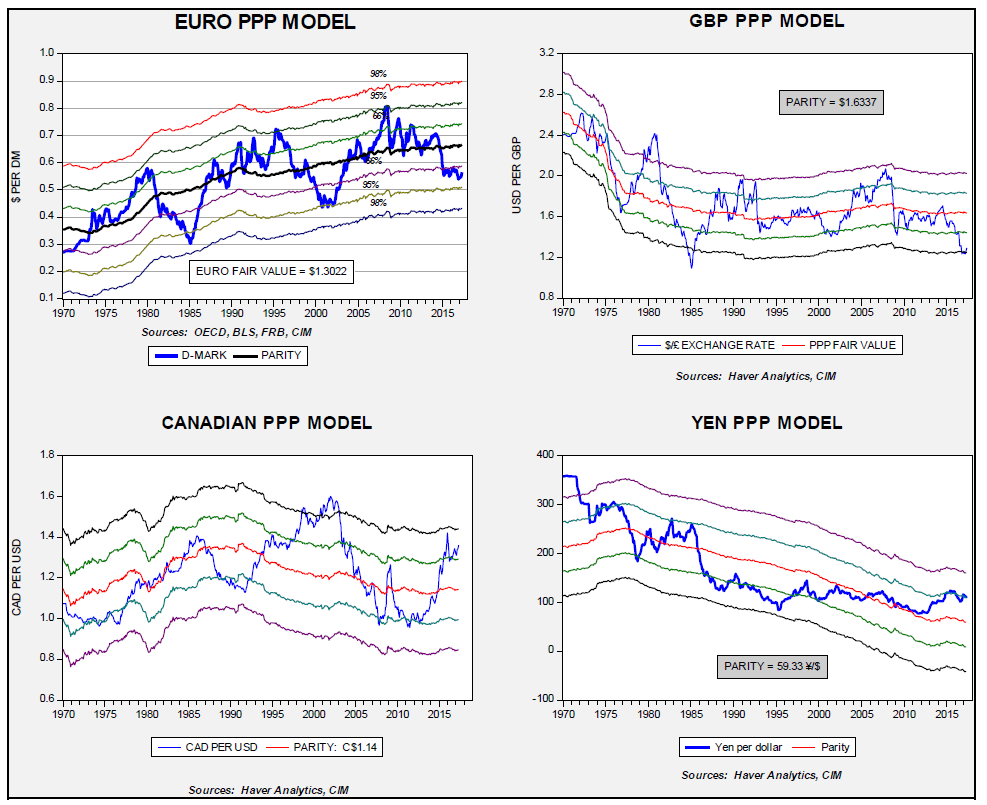 Although purchasing power parity is the oldest way to value currencies, it isn’t the most accurate. However, it tends to be useful at extremes, and exchange rates tend to move around the parity measure. In other words, parity is something of an anchor around which the actual exchange rate vacillates.

History also suggests that exchange rates can diverge from parity for long periods of time, which usually means that a catalyst is required to move currencies from extremes of under-and overvaluation.

For example, in the above euro and pound models, the deep undervaluation in the mid-1980s ended with the Plaza Accord. Yen overvaluation in the early 1990s was ended by the Halifax Accord. Changes in policy or governments can trigger an end to valuation extremes as well.

This leads us to two additional reasons for this repositioning. We believe there are two catalysts which will pressure the dollar in the coming quarters. First, the Federal Reserve appears to be hedging on future tightening. Although the dots charts still indicate rising rates, a number of FOMC members have raised worries about raising rates while inflation remains depressed.

Chair Yellen appears to be offering a trade to the hawks on the committee; instead of raising rates, balance sheet reductions can act as policy tightening. It is possible reducing the balance sheet will be dollar bullish.

However, that isn’t supported by the data.