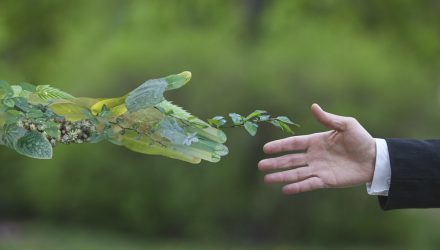 A recent “net zero 2050” report by McKinsey estimates that $9.2 trillion will need to be invested across various sectors annually to limit the global temperature rise to 1.5°C by 2050 — an estimated 60% increase on current investment levels.

Investors looking to add exposure to the quickly growing industry should consider the SmartETFs Sustainable Energy II ETF (SOLR), which offers exposure to companies poised to benefit from the shift to sustainable energy. This includes companies believed to provide or support alternative or renewable sources of energy, or those that produce, generate, transport, deliver, or extend energy applications in a way that makes alternative or renewable energy more efficient or accessible, according to SmartETFs.

The sustainable energy sector, particularly the higher growth parts of the universe, suffered in the January sell-off on concerns regarding a faster-than-expected interest rising cycle, but it has since rebounded with the surge in oil and other traditional energy prices, which is emphasizing the need for alternative energy sources.

There are several reasons why this industry is poised for accelerated growth and strong returns in the coming years.

Renewable electricity generation increased by around 6% in 2021 to over 7,900 TWh, outpacing global electricity demand growth, which was 4.5% in 2021. Compared to pre-pandemic levels in 2019, solar generation grew by 45%, wind by 32%, and bioenergy by 17%. Fossil fuel generation lagged, with coal staying flat, natural gas down 1%, and oil down 7%, according to SmartETFs.

In offshore wind, a tender in Scotland planned for 10 GW saw such demand from developers that ultimately 25 GW of total capacity was awarded, while China reported that offshore wind installations in 2021 were nearly 17 GW, which is substantially higher than expected and nearly double the country’s previously installed total offshore capacity, according to SmartETFs.

SOLR’s strongest performers last month included LG Chem, which benefitted from the separate listing of its lithium-ion battery business LG Energy on the Korean stock exchange, and Gentherm, which reacted positively to promising new product sale news, according to SmartETFs.