You are at:Home»Disruptive Technology Channel»Tesla Has Shorts in a Bind, Could Be Huge for This ETF 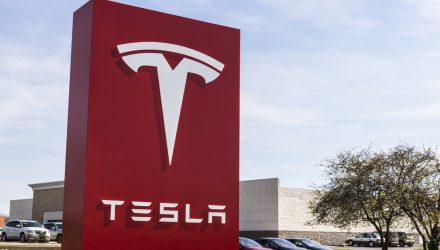 Tesla Has Shorts in a Bind, Could Be Huge for This ETF

Tesla’s seemingly undaunted rise is having profound effects in the world of ETFs. For example, the high-flying electric vehicle stock is helping the ARK Innovation ETF (NYSEArca: ARKK) to a year-to-date gain of almost 62%.

However, some data points suggest the stellar runs of Tesla and ARKK – one of the ETF’s with the largest weight to Elon Musk’s company – may not be done. Far from it. Short sellers have massive positioning in Tesla and with the stock up almost 270% this year, those bearish traders may have no choice but to unwind those positions, which would force the stock and perhaps ARKK higher along the way.

“The Model 3 maker’s stock is poised to be the first to hit a short-interest level of $20 billion, according to research firm S3 Partners,” reports Crystal Kim for Bloomberg. “The value of shares that have been sold short has climbed recently to $19.95 billion.”

Tesla is the largest holding in ARKK, accounting for 11.62% of the fund’s weight as of July 10, according to issuer data.

Even with that diversity, ARKK is still known as a “Tesla ETF” but this year, that’s obviously working in the fund’s favor as ARKK has ascended to the top of the equity-based actively managed ETF space in terms of assets under management. Add to that, the short squeeze potential is very real.

“Tesla’s squeeze is more obvious — its 233% gain this year likely is forcing out short sellers who’ve hit their limit for losses. The potential for a squeeze in Nikola, which is developing fuel-cell and battery-electric semi trucks, has more to do with high borrowing fees, S3 said,” reports Bloomberg.

Another ETF idea for a Tesla short squeeze is the ARK Autonomous Technology & Robotics ETF (CBOE: ARKQ), which allocates over 13% of its weight to that stock.