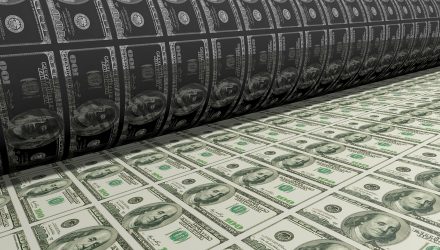 Emerging from the shadows of other disruptive technologies, 3D printing is proving pivotal to an array of applications and end markets, highlighting long-term potential for the 3D Printing ETF (CBOE: PRNT).

What bodes well for PRNT over the long haul is the sheer number of industries and markets where 3D printing is relevant. That includes governments and military use.

“Fitting soldiers with biological monitoring devices might sound like something right out of Cyberpunk 2077, but using 3D printing, the US Army is fast-tracking the technology into 2020,” reports 3D Printing Industry. “The ARL has developed novel multipurpose biosensors that, as well as physiologically tracking troops, have the potential to provide them with an enhanced awareness of situational threats in the field.”

Once again, military use could be fertile ground for technologies purveyed by some PRNT components.

“As modern warfare becomes ever more advanced, the US Army has increasingly developed methods of protecting its personnel from the spectre of biological weapons,” notes 3D Printing Industry. “Utilizing the ARL team’s 3D printed sensors, it could now be possible to detect weaponized toxins, bacteria or viruses on the battlefield, providing soldiers with the maximum possible chances of survival.”

3D printing is a disruptive technology, but it’s also becoming more mainstream. That bodes well for increased global access to its possibilities.