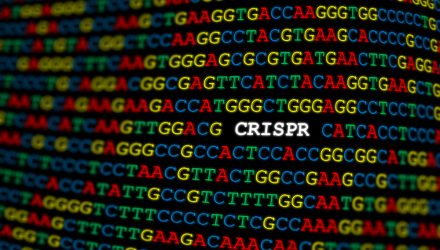 Shares of Intellia Therapeutics, Inc. (NASDAQ: NTLA) surged Monday after the firm and another company known as Regeneron Pharmaceuticals, Inc. (NASDAQ:REGN) over the weekend announced positive results from an ongoing Phase I clinical trial for an in vivo genome editing therapy known as NTLA-2001.

The ARK Genomic Revolution Multi-Sector Fund (CBOE: ARKG) was one of the beneficiaries. The actively managed ARKG had a combined weight of 5.63% to Regeneron and Intellia as of June 25, according to issuer data.

“The Phase 1 study, run by Intellia as the program’s development and commercialization lead, is evaluating NTLA-2001 in people living with hereditary transthyretin amyloidosis with polyneuropathy (ATTRv-PN). NTLA-2001 is the first CRISPR/Cas9-based therapy candidate to be administered systemically, via intravenous infusion, for precision editing of a gene in a target tissue in humans,” according to a statement issued by the companies.

Amyloidosis affects more than 50,000 people around the world. The genetic disease results from proteins within the human body taking on unusual shapes and depositing around vital organs, potentially hindering performance of those organs. Due to the fact that ransthyretin (ATTR) amyloidosis is an inherited condition, resulting TTR proteins are more unstable.

Currently, the market for related treatments is small but growing, indicating the news from Intellia and Regeneron could be of long-term importance to ARKG investors.

“The global transthyretin amyloidosis treatment market accounted for US$ 40.5 million in 2019 and is anticipated to register a CAGR of 58.7%,” according to Prophecy Market Insights.

For ARKG investors, there are at least two important points emerging from the trial results. First, Intellia’s single-dose therapy, which is a CRISPR-Cas9 treatment, was effective – 96% reductions of blood accumulation – in treating mis-formed proteins. Second, this is the first clinical trial to deliver results on CRISPR-Cas9 gene editing.

Moreover, the ebullience surrounding the Intellia progress isn’t confined to that stock. The news lifted other gene editing names too. For example, Beam Therapeutics (NASDAQ: BEAM), Crispir Therapeutics (NASDAQ: CRSP), and Editas Medicine (NASDAQ: EDIT) all gained on the news. That trio of stocks combines for over 5% of ARKG’s roster.