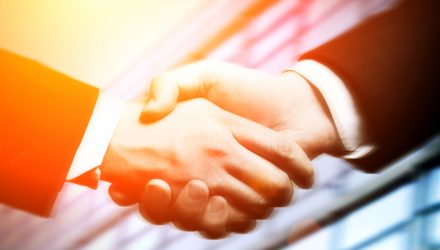 Last year’s broad market selloff hasn’t stopped deals and acquisitions in some growing industries, with one such area being aerospace and defense firms. The Russian war on Ukraine has highlighted the rising use of drones in warfare, while the tech downturn may have also allowed firms to make acquisitions and partnerships in the burgeoning space. That includes two key stocks in ARKX, the ARK Space Exploration & Innovation ETF: Iridium Communications (IRDM.O) and Trimble Inc. (TRMB).

This week saw notable announcements for both firms — Qualcomm (QCOM.O) and IRDM have partnered to provide a satellite-based messaging system on premium Android smartphones, a boost for IRDM’s satellite usage. For TRMB, meanwhile, the company announced this week that the firm had acquired integration platform-as-a-service startup Ryvit, which connects data and various architecture, engineering, and construction applications to improve project coordination.

TRMB’s stock is up 2.4% over the last five days, while IRDM is up 14.6% over that time, spiking since Thursday morning. Both stocks are big players in ARKX’s weight setup, with TRMB being the highest weighted at 9.2% and IRDM the second-highest weighted at 8.1%.

ARKX charges 70 basis points for its active investment approach and is approaching its second birthday this coming March. The strategy had seen a significant uptick in flows to start the year, adding $5.6 million in net inflows over the last five days, a turnaround from outflows over the last year or so.

These two key stocks in ARKX could help drive the strategy forward yet more this year, with their deals suggesting some interesting momentum in a sector that has short- and long-term potential. For investors keeping an eye on the space, ARKX’s focus on disruptive innovation may make sense.