You are at:Home»Disruptive Technology Channel»A Different Type of Currency: The Growing World of Stablecoins 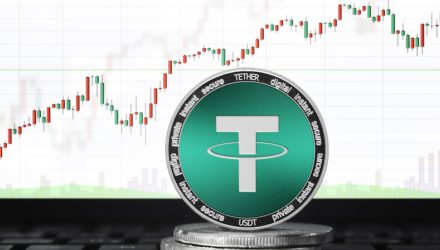 A Different Type of Currency: The Growing World of Stablecoins

In the cryptocurrency space, it’s high-flying acts like Bitcoin, Ether, and even Dogecoin that garner most of the attention, but digital assets investors do not want to sleep on stablecoins.

A basic definition of stablecoin is a digital coin tied to a traditional currency, such as the U.S. dollar. While one of the long-standing benefits of crypto assets is avoidance of fiat currencies, the stablecoin market is soaring. In fact, stablecoin volume is surging in markets outside the U.S.

“Their role in trading on and between crypto exchanges has increased dramatically, particularly outside the US, we believe for several reasons: limiting the need for access to US bank accounts, offering near instant settlement, and subjecting transactions to fewer regulatory requirements,” according to ARK research. “In fact, recently stablecoins have outpaced the USD and bitcoin in pair trades on exchanges globally.”

CryptoSlate lists 37 stablecoins, of which just six have market values north of $1 billion. Tether is by far the largest with market capitalization of $62.63 billion, as of June 11.

The Evolution of Stablecoins

Most stablecoins stem from the Ethereum blockchain, underscoring the rising uses for that technology. These coins also highlight the burgeoning threat to traditional banking poised by decentralized finance, or “DeFi.”

“They account for a majority of assets in Compound’s decentralized lending market which offers deposit yields much higher than those available in the traditional financial system,” notes ARK.

Highlighting the growth opportunity available with stablecoins is a rising usage case. After all, stablecoins eschew much of the volatility associated with traditional crypto assets such as Bitcoin. That’s luring some big name investors to the stablecoin asset class. For example, stablecoin startup Circle recently raised $440 million from a group of investors, including Fidelity.

As for Tether, its grip on stablecoin dominance may be slipping, and that could be a long-term positive for the broader stablecoin market, as well as investors that unearth opportunities in some of Tether’s upstart competitors.

“As stablecoin market caps scale, competition among their issuers appears to be intensifying,” concludes ARK. “Tether dominated the early stablecoin era but is losing share to newer entrants such as USDC which has been issued by companies such as Coinbase and promises a higher level of regulatory compliance and integration into the existing financial system.”