You are at:Home»Disruptive Technology Channel»Another Coronavirus Avenue for the 3D Printing ETF 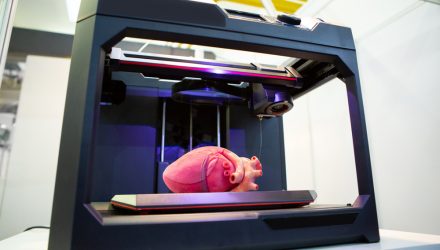 Another Coronavirus Avenue for the 3D Printing ETF

With its immense and practical applications in the healthcare arena, 3D printing is making its way into the fight against the coronavirus, which could provide a boost to the 3D Printing ETF (CBOE: PRNT).

As was noted here earlier this week, the Department of Defense is using 3D printing to increase the supply of much-needed ventilators. However, PRNT’s exposure to fighting COVID-19 doesn’t end there.

“While some technology companies have been using 3D printing, or additive manufacturing, to address the personal protective equipment shortage caused by the novel coronavirus, others are using 3D printing technology to create samples of human organs and tissues for coronavirus testing,” reports S&P Global Market Intelligence.

3D Printing to the Rescue

PRNT has some exposure to bioprinting, an increasingly import 3D printing sub-group.

“Like traditional 3D printing, bioprinting uses a device to construct a three-dimensional model created with a computer-aided design system,” according to S&P Global Market Intelligence. “Instead of using plastic filaments, however, bioprinters use cells mixed with biocompatible materials, called bioinks, to create three-dimensional systems that act like human organs and tissues. These systems can then be deployed in tests by drug developers or, in some cases, implanted into the human body.”

“As many companies speed up the production of coronavirus therapies and typical regulatory guidelines are set aside, 3D bioprinting may see greater use as researchers seek a quick way of testing the effects of these drugs,” reports S&P Global Market Intelligence.

“The global 3D Printing in the Medical and Dental Market is expected to witness promising growth in the next few years,” according to Reports and Reports. “The rising level of competition among the leading players and the rising focus on the development of new products are likely to offer promising growth opportunities throughout the forecast period.”