You are at:Home»Disruptive Technology Channel»An ETF to Capture the Opportunity in Autonomous Technologies 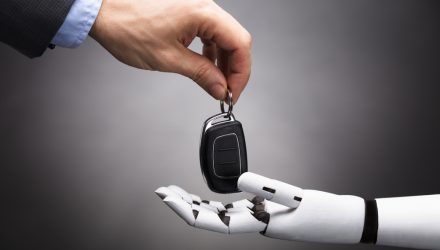 An ETF to Capture the Opportunity in Autonomous Technologies

For example, autonomous ride-hailing is likely to become more affordable than personally owned vehicles. Adjusted for inflation, the cost to own and operate a personal car has not changed since the Model T. ARK estimates that, at scale, autonomous taxis will cost consumers $0.25 per mile, spurring widespread adoption.

According to ARK’s research, the ride-hailing market today generates about $150 billion in revenues globally with take rates of 10 to 30% and profit margins as high as 50% in high-performing cities. Looking ahead, autonomous ride-hailing could generate 50% margins, but its low price point should expand the total market from $150 billion in revenues with take rates up to 60% to $6-7 trillion by 2030.

While not yet commercialized, ARK projects that drone delivery platforms will generate nearly $50 billion in revenues, $14 billion in hardware sales and $3 billion in mapping revenues by 2025.

ARK believes that the global 3D printing market will scale at a compound annual rate of 60% during the next five years, from $12 billion to roughly $120 billion by 2025.

As a way to capture this potential opportunity, investors can turn to ETF strategies, such as the ARK Autonomous Technology & Robotics ETF (NYSEArca: ARKQ). The ARK Autonomous Technology & Robotics ETF is focused on companies expected to substantially benefit from the development of new products or services, technological improvements, and advancements in scientific research related to, among other things, energy, automation and manufacturing, materials, and transportation. The ETF captures the converging industrial and technology sectors, capitalizing from autonomous vehicles, robotics, 3D printing, energy storage, and space exploration technologies. The ETF can provide long-term growth potential with low correlation of relative returns to traditional growth strategies and negative correlation to value strategies. ARKQ offers improved diversification due to its low overlap to traditional indices, complementing a traditional value and growth portfolio.

Financial advisors who are interested in learning more about innovative technologies can watch the webcast here on demand.