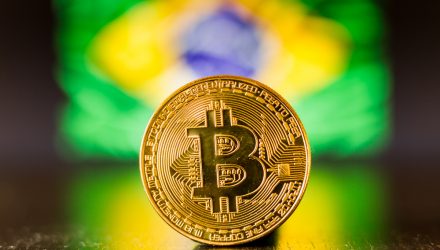 Maybe a Brazilian Boost for XBTF

Bitcoin prices tumbled this year, but an expanding usage case for the largest cryptocurrency remains a credible catalyst. Crypto exchange traded funds, including the VanEck Bitcoin Strategy ETF (XBTF) and the VanEck Digital Assets Mining ETF (DAM), are levered to bitcoin price action, implying that the funds can get a lift from an expanding usage case for the digital asset.

While that’s a longer-ranging theme, some help on that front may have arrived on Tuesday. Lawmakers in Brazil approved bitcoin as a form of digital payment, and that legislation now moves to the president’s desk for final approval. This is no small feat when considering that Brazil is Latin America’s most populous nation and home to the region’s largest economy.

“The bill tasks the executive branch with selecting government bodies to oversee the market. The expectation is that the Central Bank of Brazil (BCB) will be in charge when bitcoin is used as payment, while the country’s securities and exchange commission (CVM) will be the watchdog when it is used as an investment asset. Both the BCB and the CVM, along with the federal tax authority (RFB), helped lawmakers craft the overhaul legislation,” reported Bitcoin Magazine.

For Brazil, adoption of bitcoin as a form of payment could make sense. The country has long had one of the most attractive crypto ecosystems among developing economies, and many younger investors there are more comfortable embracing digital assets than traditional asset classes, such as stocks and bonds.

An added benefit of the Brazilian legislation, particularly against the backdrop of the FTX collapse in the U.S., is added regulation. While those protocols are specific to Brazil, the rules could go a long way toward inviting more regulation of the global crypto market — something many investors believe would be a long-term positive for bitcoin, and therefor funds like XBTF and DAM.

Bottom line: Broader acceptance of bitcoin as a legitimate form of payment, particularly at a time when the digital currency is slumping, could act as a catalyst for ETFs such as DAM and XBTF.