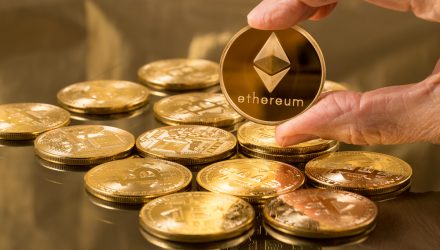 Ethereum Merge Could Be Nonstarter for Bitcoin

Ethereum’s upcoming merge is one of the more anticipated cryptocurrency events this year, but what impact — if any — it has on bitcoin remains to be seen.

Some crypto experts argue that despite the merge being a potential catalyst for ether, which is the second-largest digital currency, it’s unlikely to be a needle mover for bitcoin. That doesn’t mean investors should simply gloss over exchange traded funds such as the VanEck Bitcoin Strategy ETF (XBTF).

“Conversely, the immediate impact of the Merge on Bitcoin will probably be minimal. As for ether’ in relation to bitcoin, most experts seem to agree that any resultant price movements will likely be transient. After all, Ethereum’s switch to proof-of-stake has been on the network’s to-do list from inception,” reported Frederick Munawa for CoinDesk.

XBTF is actively managed and holds bitcoin futures. Those traits could be useful in the current environment by virtue of the fact that bitcoin is slumping mightily this year and if it rapidly reverses course, as it’s been known to do over its history, XBTF could be responsive to that rebound.

For better or worse, XBTF’s methodology and structure imply that the VanEck fund won’t be highly responsive to the Ethereum merge. That’s a not a negative commentary. In fact, some experts remain bullish on bitcoin.

“Joe Orsini, vice president of research at Eagle Brook Advisors, also believes bitcoin will remain the dominant store of value in the long term, despite a temporary performance bump in ether’s post-Merge price,” according to CoinDesk.

For now, bitcoin is the largest digital currency by market value, and ether is undoubtedly a solid number two. The two assets are setting themselves apart in the cryptocurrency space, and how the rivalry shakes out in the years ahead is likely to affect a variety of ETFs, including XBTF.

“Bitcoin currently has around 15,000 nodes (computers in a blockchain network) while Ethereum has roughly 9,500 nodes. However, Ethereum has higher transaction volume (currently over 1 million daily transactions) compared with Bitcoin (approximately 270,000 daily transactions). Other metrics such as active addresses and number of projects built on top of a network could also be appropriate ways to measure dominance,” concluded CoinDesk.