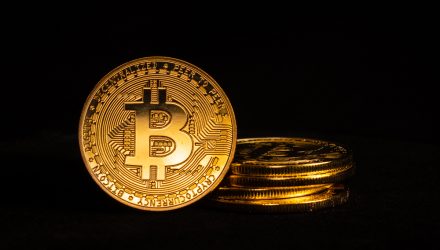 Boring Could Be Beautiful for XBTF

If there’s one thing bitcoin and other cryptocurrencies are known for, it’s volatility. That is to say, boring isn’t usually the name of the game in the world of digital assets. On the other hand, given all the tumult that’s permeated the crypto realm this year, a dose of boring might be welcomed by investors and could actually be of benefit to exchange traded funds such as the VanEck Bitcoin Strategy ETF (XBTF).

Recent price action in bitcoin, which is the largest cryptocurrency, has been lethargic relative to historical standards, but that could be an encouraging sign going forward.

“Digital currencies have fallen sharply since a scorching run in 2021 which saw bitcoin climb as high as $68,990. But for the past few months, bitcoin’s price has bounced stubbornly around $20,000 in a sign that volatility in the market has settled,” reported CNBC.

Bitcoin’s reputation for volatility has long kept some investors at bay, but in recent weeks, the digital currency’s volatility has fallen below that of major equity benchmarks, such as the S&P 500 and the Nasdaq 100 Index.

Further adding to the near-term allure of XBTF is the fact that bitcoin’s correlation to stocks, which had been intimate for some time, is showing signs of waning. That could be a sign that bitcoin is in fact getting somewhat boring, and that’s not a negative.

“The current so-called ‘crypto winter’is largely the result of aggressive tightening from the Fed, which has been hiking interest rates in an effort to tame rocketing inflation. Large crypto investors with highly leveraged bets like Three Arrows Capital were floored by the pressure on prices, further accelerating the market’s drop,” according to CNBC.

Another potential positive for XBTF could be bitcoin’s reaction to Wednesday’s news that the Federal Reserve is raising interest rates by another 75 basis points. For much of this year, bitcoin was punished by rate hikes, but Wednesday’s headlines weren’t heavily damaging to the cryptocurrency.

“Selling pressure has slowed, too, as bitcoin miners reduced their sales of the cryptocurrency, suggesting the worst may be over for the mining space. Publicly-traded bitcoin miners sold 12,000 bitcoins in June and only around 3,000 in September, according to Goldman Sachs,” reported CNBC.