You are at:Home»Crypto Channel»Bitcoin Donations Reach $17 Million in Outpouring of Support for Ukraine 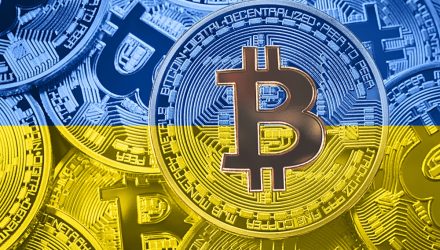 Bitcoin Donations Reach $17 Million in Outpouring of Support for Ukraine

Donations in cryptocurrencies continue to flow into the country of Ukraine in an outpouring of support as Russia’s invasion enters its second week. Since February 24, crypto donations have reached over $54 million — $17 million of which is in bitcoin.

The data stems from blockchain analytics firm Elliptic, which notes that there have been 102,000 cryptoasset donations thus far. The funds have been providing support to the Ukrainian government and Come Back Alive, an NGO that supports Ukraine’s military.

The swift movement of money highlights the ability of bitcoin and other cryptocurrencies to change hands across borders. Rather than donors needing to transform their local currency into Ukrainian hryvnia, cryptocurrencies can span across all nations.

“Cryptocurrency is particularly suited to international fundraising because it doesn’t respect national boundaries and it’s censorship-resistant — there is no central authority that can block transactions, for example in response to sanctions,” said Elliptic’s chief scientist, Tom Robinson.

As more support for Ukraine comes in the form of bitcoin, one way to get exposure in the leading cryptocurrency without investing directly on a crypto exchange is the ProShares Bitcoin ETF (BITO). BITO gives investors exposure to a bullish sentiment in bitcoin on a traditional exchange with governmental regulation.

The popularity of non-fungible tokens (NFTs) is also making itself known during the support for Ukraine. NFT donations, including one CryptoPunk NFT worth $200,000, have been sent to the country’s government for added financial support.

CNBC also reports that “UkraineDAO has auctioned off an NFT of the Ukrainian flag for $6.5 million in ether, which makes it among the most expensive NFT ever sold. Elliptic says that the proceeds are to be donated to Come Back Alive.”