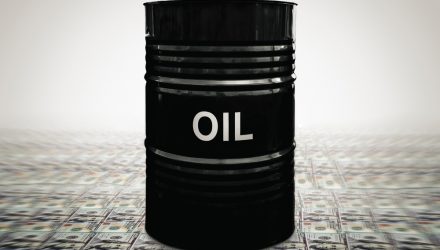 After pulling back significantly in recent days, crude oil and crude ETFs are surging higher on Monday, amid growing concerns over gas supply from Russia and a drop in the dollar, which is helping to overshadow demand worries related to a potential recession and China lockdowns related to the coronavirus.

Brent crude futures for September settlement climbed 4.3% to reach $105.53 a barrel in the early afternoon, having already rallied 2.1% on Friday.

The news has been significant for analysts, who warn that such a move could see a spike in oil once again.

“Brent crude will find support at the end of the week if Russia does not turn the gas back on to Germany after Nord Stream 1 maintenance,” said Jeffrey Halley, a senior analyst at OANDA.

OPEC is affecting crude prices as well, with Iraq’s energy minister projecting that oil will continue to trade over $100 a barrel for the rest of 2022 and beyond, necessitating that the OPEC+ producers’ group control supply and demand.

The cartel, led by Saudi Arabia, has been uniting with Russia and other producers to slowly release supply as economies and energy demand recovered from the pandemic. OPEC+ is set to reverse its production curbs by the end of the summer while continuing to work together throughout 2022.

“I would like OPEC to retain its tools to measure and control output and maintain the existing balance,” Iraqi Oil Minister Ihsan Abdul Jabbar said in an interview. “We will discuss that with our partners.” OPEC+ meets again on August 3.

Meanwhile, although he remained upbeat in his speech, President Biden failed to accomplish meaningful change after meeting with Saudi leaders.