You are at:Home»Featured»Crude ETFs Rally Again, Despite Overbuying Concerns 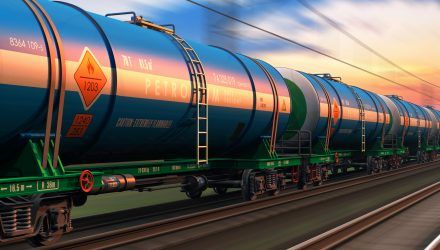 Crude oil and crude ETFs are surging once again on Friday, but some analysts are now concerned the market be have gone too far and is due for a drop.

Cyclical sectors, those most sensitive to an economic rebound, have led the rally in February. Energy, one of those sectors, rallied over 12% so far, while financials, the other big gainer, added 8.4%.

A significant amount of the gains were thanks to crude oil prices, which have been surging since November, after the market launched its second measurable run-up since the April lows, where oil plummeted to negative territory for the first time.

West Texas Intermediate crude oil is currently trading within spitting distance of $60 per barrel, tagging $59.82 in Friday trading, and taking the market back to levels not seen since last February, a fresh 13-month peak.

Yet after a 23% rally so far this year, one major energy expert admonished bullish investors.

“My personal view … is that the price is too frothy, and that it doesn’t warrant a WTI price of greater than $58,” Regina Mayor, global and U.S. head of energy for KPMG, told CNBC’s “Trading Nation” on Thursday.

“Supply is coming down. … We’re all surprised by how quickly it’s taken to draw down those stocks and to get us closer to the 5-year rolling average,” Mayor said of what’s driving higher oil prices. “We’re [also]seeing real-life improved demand out of China and India, although I caution that the China number is a pandemic comparator for January 2020 versus January 2021, and then there are expectations that demand will increase with vaccinations and more people moving around.”

Mayor says those factors support the price of West Texas Intermediate crude remaining in the low $50s, rather than closer to $60. Mayor added that any price above $30 for WTI is profitable for the producers.