You are at:Home»Core Strategies Channel»Using a Block Desk for Large Trades 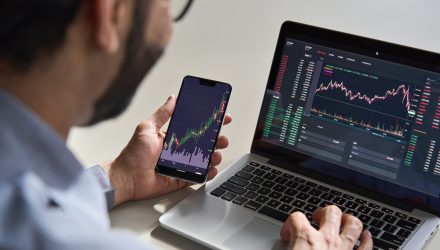 When trading ETFs, there are many criteria to consider, such as the use of limit orders, market volatility, when to trade if the underlying markets are closed, and the liquidity of the ETF. Advisors typically look at the on-screen liquidity, which is gauged by its average daily volume (ADV).

American Century Investments offers some examples where the on-screen liquidity was not as deep, and a trading or block desk helped execute these trades efficiently. These are block trades that were executed in domestic equity, international equity, and fixed-income ETFs that had minimal to no impact on the bid/ask spread, resulting in efficient execution for the investor.

Example 1 shows a trade in the American Century Quality Diversified International ETF (NYSEArca: QINT), an international equity ETF. At the time this trade was executed, QINT had a 30-day ADV of 11,737 shares, which is well below the block trade of 196,269 shares for a total value of about $10 million. The trade was executed at the asking price of $51.04. So, with the help of the block desk, the buyer could capitalize on the underlying securities that weren’t visible on the secondary market. 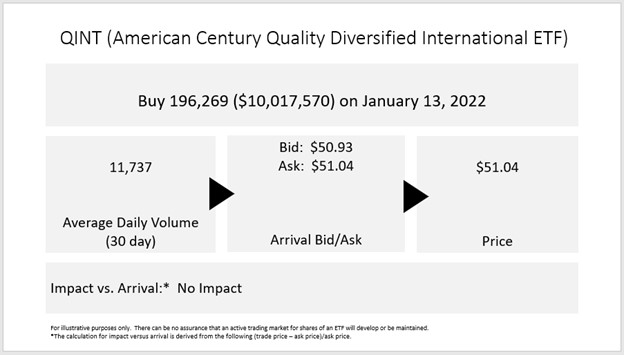 Example 2 shows a similar example within a fixed income fund, the American Century Multisector Income ETF (MUSI). This trade was for 113,000 shares at $49.45 for a total value of $5.6 million, where the 30-day ADV at the time was 3,879. The block desk was again able to capitalize on the underlying liquidity in the market to execute the trade efficiently at mid-price. 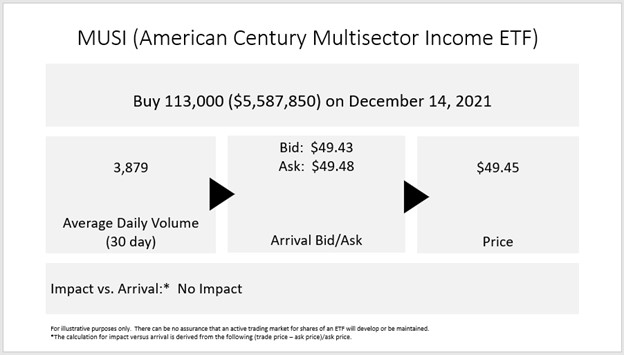 Example 3 shows a trade for 5,381 shares in an international equity ETF, the Avantis Responsible International Equity ETF (NYSEArca: AVSD). Since AVSD was a newly launched ETF, the 5-day ADV was only 194 shares. The trade was executed at $52.85 for a total value of $284,386. This shows that the block desk can access the market depth not seen by the average investor. 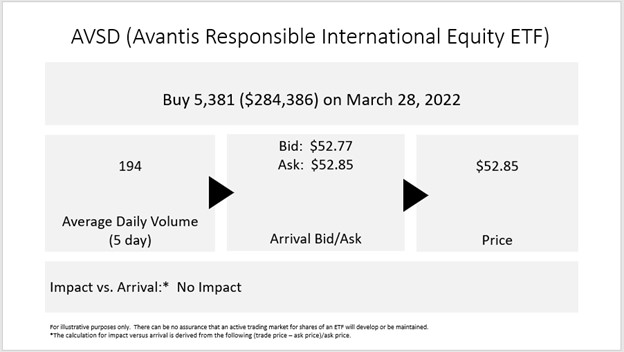 Example 4 is a trade in a fund that discloses holdings every quarter, the American Century Focused Dynamic Growth ETF (FDG). The trade was efficiently executed at the asking price of $75.62 for 152,475 shares and $11.53 million in total. 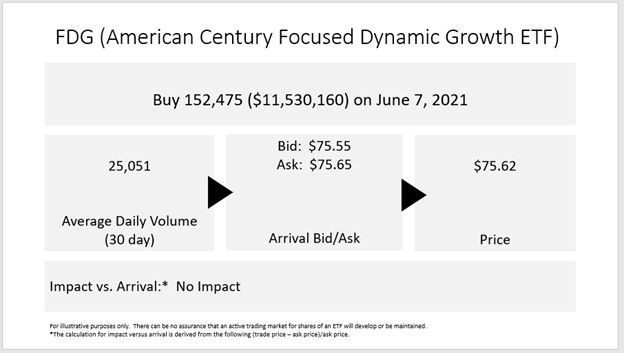