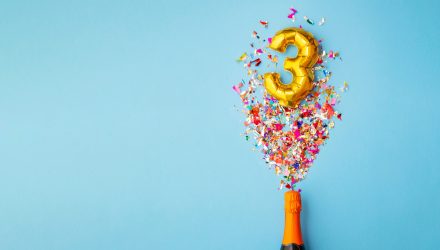 It may not feel like it, but it was just three years ago that the SEC adopted its new ETF rules, modernizing how the wrapper is regulated. The move had been a long time coming, taking the burgeoning ETF space to new heights. With ETFs launched that year hitting their crucial three-year milestones in 2022, investors should note some key takeaways from this crop of three-year mark ETFs.

Remarkably, all three Avantis ETFs are actively managed, with the JPMorgan BetaBuilders International Equity ETF (BBIN) being the lone passive strategy in the top five ETFs by three-year flows. In three-year returns, AVUV came second, returning 51%, only surpassed by the remarkable iPath Series B Carbon ETN (GRN), which returned 204% over three years.

Avantis’ suite of active ETFs weren’t the only active strategies to show passives how it’s done. Several other strategies focused on risk and volatility cracked the $1 billion mark for three-year inflows, underscoring how uncertain the last few years have been, from the pandemic to full-scale war returning to Europe.

Outside of the $1 billion tier, investors can find Innovator’s power buffer ETF suite adding to the trend of active investment strategies that protect investors from uncertainty while offering their various equity exposures. The Innovator U.S. Equity Power Buffer ETF – November (PNOV) took in $615 million over three years, returning 14.7% over the last three years, one of five Innovator strategies to take in more than $300 million since inception.

While POTX did take in $239 million over three years in net inflows, that was the highest amount among all five ETFs, passive and active. Investors may have initially felt drawn to the growing legal availability of cannabis in states throughout the U.S., but that has yet to bear significant fruit in cannabis-flavored three-year mark ETFs.