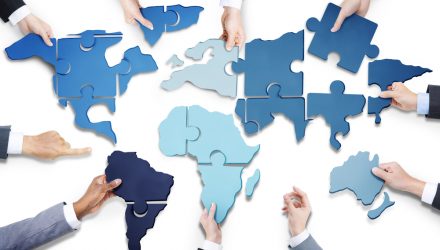 In a year defined by global uncertainty in geopolitics and for central banks, investors looking outside of U.S. equities have had a lot to navigate. From land war in Europe to a strong dollar’s impact on developing economies, investors still looking for a foreign equities slice in their portfolios may want to consider a quality international ETF. One such strategy to keep an eye on may be the American Century Quality Diversified International ETF (QINT).

There are some key large cap firms outside of the United States that can play big roles in investors’ portfolios, from table stakes biotech holdings like Novartis AG (NOVN) and Sanofi (SAN) to a sports car company like Ferrari NV (RACE). With U.S. equities directly in the crosshairs of the Fed’s aggressive fight against inflation, there is a case for foreign large cap equities to offer some balance.

Recent news adds to the case, with the Euro-Zone seeing its first signs that the rate of inflation in the may be slowing down after almost 18 months of increases. Japan, meanwhile, has engaged in its own campaign to boost its economy, with both government stimulus and its decision to reopen its country to tourists.

QINT tracks the American Century Quality Diversified International Equity Index, which includes large and mid-cap global firms outside the U.S. with strong growth prospects and good fundamentals relative to their share price. By focusing on larger, less volatile firms, it manages risk and moves between growth and value as needed.

QINT has outperformed the ETF Database Category Average and the FactSet Segment Average over three months, returning 4.16% compared to 2.4% and 1.7% respectively. QINT also has taken in net inflows of $4 million over one month and $9.2 million over the last three months.

The quality international ETF charges 39 basis points for its exposures, with dividends too, offering a 2.04% annual yield. That’s more than the FactSet Segment Average but less than the ETF Database Category Averages of 1.52% and 2.55% respectively.

Foreign large blend equities took in $4.9 billion in net inflows over the last month and returned 9.33% in that time, compared to -16.2% YTD. Those are some notable numbers for international equities-hungry investors, with QINT an ETF to watch should some positive foreign trends continue to show.