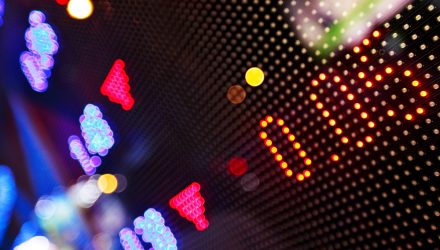 Bond exchange traded funds strengthened while the equity markets plunged, with the S&P 500 on pace to confirm a correction, and risk-off traders turned to safety bets.

Many investors turned risk-off in the face of aggressive monetary policy tightening out of the Federal Reserve to combat inflationary pressures and the prospects of a Russian attack on Ukraine adding to geopolitical risks.

“If it was just Ukraine by itself, people would ignore it but it is kind of icing on the cake today,” Gary Black, managing partner of the Future Fund Active ETF (FFND), told Reuters. “It’s happening at the same time that people are worrying that the Fed is going to make a policy mistake and (that’s) just adding to the uncertainty.”

NATO said on Monday that it was placing forces on standby and reinforcing the eastern European region with more ships and fighter jets in response to Russia’s increasing military presence along Ukraine’s borders.

Meanwhile, traders were waiting on the Fed’s policy meeting, which concludes on Wednesday, and many are watching for how worried the Fed is over the elevated inflation levels and how aggressive the central bank will act to contain it.

“The buy-the-dip mentality has left the market at this juncture,” Michael Mullaney, director of global markets research at Boston Partners, told the Wall Street Journal. “If you’ve tried to buy this dip, you’ve gotten toasted.”

Investors looking to strengthen their fixed income portfolios can consider the Avantis Core Fixed Income ETF (AVIG), which invests in a broad set of debt obligations across sectors, maturities, and issuers. AVIG pursues the benefits associated with indexing, such as diversification and transparency of exposures. However, the fund also has the ability to add value by making investment decisions using information embedded in current yields.