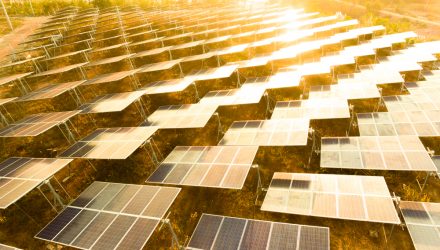 The cost of solar energy has dropped by more than 70% in the last ten years, and the Biden administration is looking to convert 40% of current electric consumption to this alternative energy source by 2035, reports CNBC.

Current solar energy contribution is 3% and would need to grow by three to four times what its current trajectory is, according to the Department of Energy. The only way to attain these goals would be through tax credit extensions, continuing price drops, and heavy subsidies or other funding options.

Over the past decade, solar power has increased 4,000%, an astronomical amount that still only contributes a very small percentage to the power grid.

While the levelized cost of a solar system is currently at $0.50 a kilowatt hour for residential use, the Department of Energy aims to have it cost $0.05 per kwh by 2030. They also have the goal of reducing commercial solar system costs from $0.39 per kwh now to $0.04 by 2030.

Last year saw a record number of solar installations, with supportive policies as well as decreased costs looking to boost record numbers again for this year. The Department of Energy believes that the best way to encourage continued growth and boost adoption rate to meet the 2030 goals is through clean energy tax credits. Existing tax credits, recently extended in December on a short-term basis, have been a primary driver for the increased adoption of solar energy.

The DoE is also looking at tax incentives for transmission and storage systems and prioritizing advanced manufacturing and innovation in the field. There is also a push to invest in community and low-income solar.

“Low- and moderate- income Americans are less likely to adopt solar due to issues like lack of access to financing, which perpetuates energy inequalities and leads to lower overall levels of solar deployment,” a Department of Energy memo said.

Last week’s infrastructure bill included billions for clean energy projects, and there continues to be rhetoric from the Biden administration pushing the job growth potential the sector presents. The most recent memo said that a burgeoning solar energy industry could create as many as 1.5 million jobs by 2035.

The American Century Mid Cap Growth Impact ETF (MID) invests in companies that are actively working across a broad spectrum of ESG principles, including clean energy and solar. MID is an actively managed fund that seeks to invest in mid cap companies that exhibit growth and ESG principles.

Using the United Nations Sustainable Developmental Goals (SDG), which include goals such as affordable and clean energy; decent work and economic growth; industry, innovation, and infrastructure; and responsible consumption and production, the portfolio managers assign each security an impact thesis based on its fundamental growth profile and current or projected SDG alignment.

By utilizing third-party mapping tools, frameworks that are provided by sustainable investing platforms, or internal research, the impact thesis is created. In order to avoid impact washing (when companies aren’t actually following SDG but give the impression they are), the highest emphasis is placed on the impact created by the product or service the company produces. Companies can align on more than one SDG, and the fund doesn’t prioritize one SDG over another.

MID uses the market caps from the Russell Mid-Cap Growth Index, which are companies between $677 million to $46 billion, and is a non-diversified fund.

As an actively managed fund, it is semi-transparent and publishes a proxy portfolio daily. The ETF carries an expense ratio of 0.45%.