You are at:Home»Core ETF Channel»Digging into Why There are Fewer ETF Launches in 2019 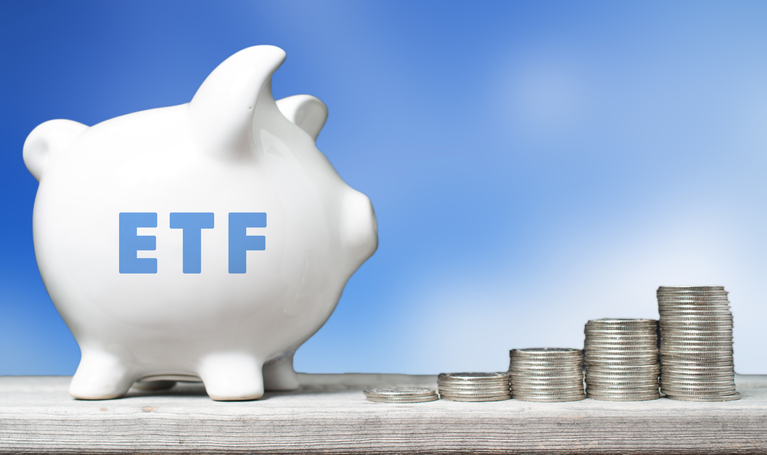 Digging into Why There are Fewer ETF Launches in 2019

Despite passing $4 trillion in ETF assets under management this year, asset managers have slowed down the pace of product launches compared to 2018. CFRA thinks some of this was affected by some regulatory uncertainty and a more measured approach from the top four ETF providers. However, there’s been no shortage of innovation in the ETF space this year.

In the first ten months of 2019, there were 206 exchange traded products that came to market, according the First Bridge Data, a CFRA company. Including what launched in November and the possibility of some additional products during December, the final tally is likely to be below the 272 from 2018 and more akin to the 248 that came to market in 2017. On a calendar year basis, the third quarter’s 32 new products were 43% less than the prior year. However, this came on the heels of a very strong second quarter of 2019, when the 57 new exchange traded products were more than double the year before level. 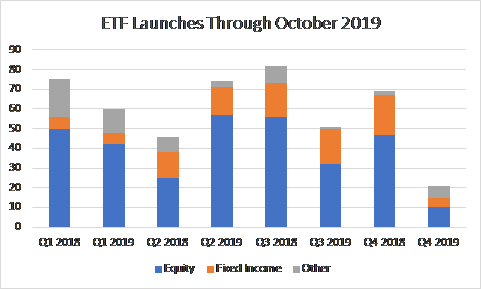 At an asset class level, our data shows asset managers launched more fixed income ETFs in the second (14 vs. 13) and third quarters (18 vs. 17) in 2019 compared to the prior year. Meanwhile, the second quarter was a recent peak for equity ETF launches with 57 new products.

Yet CFRA expects we will see more equity ETFs come to market in the first half of 2020, following the implementation of the ETF rule and the recent approval of non-transparent, actively managed ETF structures from Precidian, Blue Tractor and large asset managers Fidelity, Natixis and T Rowe Price. The ETF rule, which will likely be implemented before the end of the year, provides a consistent process for a new ETF to gain regulatory approval and levels the playing field for providers large and small. We think many asset managers have awaited clarity and have products in the pipeline for deployment.

While the top four firms have been more reserved with product deployment in 2019, which CFRA views as healthy given that they already have many successful funds, we note some other firms have brought to market new and creative products.

For example, Direxion Shares, well known for its leveraged and inverse ETFs, added 10 relative weight ETFs in the first quarter of 2019 that provide tilted asset allocation exposure. Direxion MSCI USA Cyclicals Over Defensive (RWCD) is one such ETF and it has long exposure only to Communications Services, Consumer Discretionary, Financials, Industrials, Information Technology, Materials and Real Estate sectors, but short exposure to defensive sectors, such as Consumer Staples, Energy and Utilities.

In addition, Innovator Management launched 19 new funds this year designed to buffer losses and cap the gains ETFs achieve, using one-year options. The firm first successfully launched a few funds in August 2018 tied to the S&P 500 Index and this year expanded the suite to include other parent indexes, such as the Russell 2000, and with different starting periods. Innovator S&P 500 Buffer ETF – July (BJUL) is one such example.

Lastly, although Global X has launched fewer new funds in 2019, it further focused on the thematic ETF space, with five new products, including a cannabis one in September and cybersecurity and video games/Esports funds in October. We think recently launched Global X Thematic Growth (GXTG), which will hold a select group of the firm’s thematic products, is one to watch as it enables investors a chance to get diversified exposure to various long-term themes.