Meanwhile, unemployment and inflation were near lows for the decade. And the economy had expanded for eight straight years.

The situation was a lot different under Nixon, to say the least. The US economy was in a recession. Inflation was in the double digits, and unemployment was rapidly rising.

Interest rates were also surging. By the time Nixon resigned, the 10-year Treasury note had hit 7.4%. (It’s currently at 1.7%.)

To add insult to injury, the US was in the middle of the Arab oil embargo.

Given the huge disparities, it’s not hard to see that market fundamentals drove stocks up during Clinton’s impeachment… and down during Nixon’s impeachment proceedings.

This all begs the question: What do the fundamentals look like now?

We’re much closer to the Clinton era than the Nixon era. Here are the stats again: 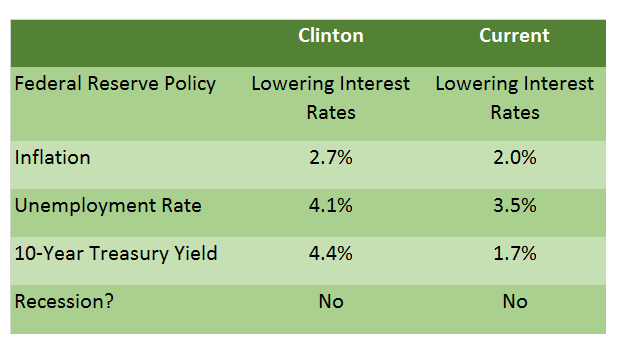 The Federal Reserve is lowering interest rates, which again, is good for stocks. Unemployment and inflation are near multi-decade lows. And the economy has expanded for 10 straight years.

Plus, high-flying technology stocks are driving the S&P 500 higher, just as they were during the Clinton era.

This isn’t to say that a Trump impeachment wouldn’t have indirect effects.

To start, it would weaken Trump’s negotiating position with China, pushing the likelihood of a US-China trade deal lower. This, in turn, could push stocks lower.

Impeachment would also hinder the chance of bipartisan legislation, such as economically stimulative infrastructure packages.

But the point remains: The push toward impeachment will have little to no direct effect on the stock market.

Anyone who says otherwise should not be taken seriously.