You are at:Home»Core Equity Channel»ProShares ‘SH’ ETF Proves It’s OK to be a Big Bear 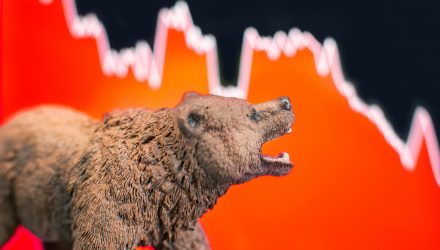 Global growth concerns and a more cautious Federal Reserve is doing wonders if you’re a bear when it comes to the S&P 500, particularly the ProShares Short S&P 500 (NYSEArca: SH), which rose 1.60 percent on Friday.

For investors who are predisposed to a long-bias strategy can look at ETFs like the SH ETF if they want to get tactical and take the other side when markets go awry. Certainly investors want the broad market index like the S&P 500 to be performing well, but there are times when they need to bring out their inner bear.

It hearkens back to the 1996 cult film “Swingers” in which actor Vince Vaughn’s character chides the heartbroken protagonist played by Jon Favreau who continues to pine over an ex-girlfriend that unceremoniously left him six months ago. Vaughn’s character, the slick-talking Trent, tries to instill confidence into Favreau’s character, Mike, by re-immersing his buddy back into the dating scene.

How does Mike conjure up the confidence? Trent has the answer: by being a bear.

Investors feeling heartbroken over Friday’s 400-point loss in the Dow Jones Industrial Average and more specifically, a 1.54 percent decline in the S&P 500 as of 2:00 p.m. ET can bring out their own bear with the SH ETF. SH seeks daily investment results that correspond to the inverse (-1x) of the daily performance of the S&P 500® Index, and invests in financial instruments that ProShare Advisors feel will produce daily returns consistent with the fund’s investment objective.

With the S&P 500 up 13.88 percent through Thursday’s close year-to-date, SH is obviously on the downside with a loss of 9.93 percent. However, when U.S. equities took a deep-dive into a pool of red in late 2018, SH was a gainer, moving past its 200-day moving average and peaking in mid-December: