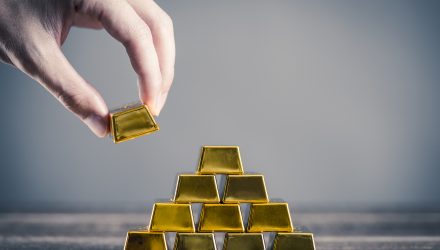 As the global central banks try to enact policy changes that would benefit their own currencies, investors may consider gold and related ETFs to better safeguard their wealth.

Traders fear the possibility of U.S. foreign exchange intervention after President Donald Trump censored China and Europe for playing a “big currency manipulation game.” Meanwhile, the U.S. is moving toward weakening its dollar currency, which could be a trigger for other foreign governments to follow suit, sparking a “true currency war” that would involve the yuan and euro, according to Deutsche Bank strategist Alan Ruskin.

“With a currency war most likely to be fought on USD/CNY and EUR/USD terrain, one approach would be to steer clear of the direct conflict,” Ruskin said in a recent note. “By far the most direct and simple way to trade the complexities of a currency war is by going long gold.”

Trump has long expressed concerns over the strength of the USD and the pressure on U.S. trade. A Fed trade-weighted measure of the greenback is close to the strongest since 2002, reflecting a drag on a American exports. The Fed, though, is widely expected to lower rates later this month, which should help weaken the U.S. dollar.

“If (to our surprise) intervention is enacted on a scale that goes far beyond past interventions, and is timed to go with Fed rate cuts, it would be significant in reinforcing a dollar top,” Ruskin added.