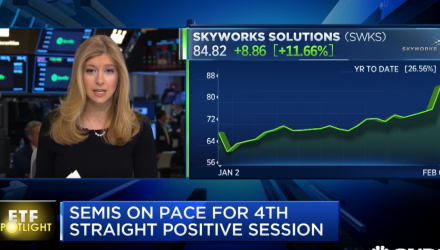 In the latest round of fourth-quarter earnings reports, the majority of semiconductors are pointing to weakness in China as a key drag on their businesses. For example, chipmaker Nvidia forecasted a weaker revenue guidance after it cut its projected revenue to $2.2 billion from $2.7 billion.

It was reported by the International Monetary Fund recently that China’s economy grew at a rate of 6.6 percent last year based on numbers coming out of China’s government. The figure was in line with analyst expectations, but represented its slowest pace of growth in almost 30 years.

“The one thing with China is it’s not a made-up story. It’s not like companies are blaming just the Fed or the weather,” said Quincy Krosby, chief market strategist at Prudential Financial. “As we go through the week, if this becomes a theme in many different sectors, it’s going to lend urgency to the idea that the global economy is slowing and the need for more stimulus.”

Another chipmaker, Intel is forecasting lesser-than-expected revenue, which could be another telltale sign for weakness in the sector.