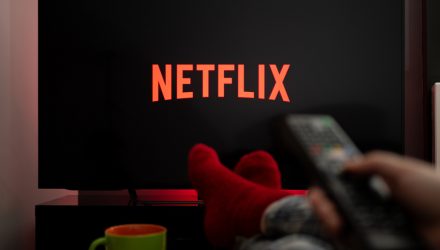 Meanwhile, Netflix shares were 7.9% higher on Friday. NFLX makes up 4.2% of VOX’s underlying portfolio and 3.1% of PBS.

Netflix has partnered with Microsoft to launch a lower-priced, ad-supported streaming service as soon as this year, according to the Motley Fool.

“Microsoft has the proven ability to support all our advertising needs as we work together to build a new ad-supported offering,” Netflix COO and chief product officer Greg Peters said in a statement. “More importantly, Microsoft offered the flexibility to innovate over time on both the technology and sales side, as well as strong privacy protections for our members.”

There were rumors that Netflix could partner with Google’s Alphabet, but the advertising giant has a competing platform with its Youtube services.

“I have to imagine, in choosing Microsoft, Netflix was concerned about the conflicts they would potentially expose themselves to with other key partners,” Matt Spiegel, a top media and entertainment executive at the global information solutions company TransUnion, told Ad Age.

The new ad-backed tier is projected to help bolster Netflix’s revenue from its U.S. and Canada segment by $1 to $3 billion annually. To put this in perspective, the online streaming company generated $29.7 billion in revenue over its most recently completed fiscal year.

Netflix has been toying with the idea of increased ad revenue on its streaming service after greater competition in the online stream services segment, along with a re-opening economy, began to eat away at Netflix’s membership demand for at-home entertainment. The reversal came after executives had resisted calls to launch a lower-priced ad-supported tier for years, given the company’s previous growth in subscribers, revenue, and profits.