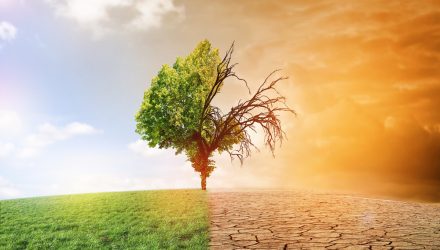 Droughts ravaged the northern hemisphere this summer, with low rainfall and record temperatures impacting Europe, China, and the United States at intensities that can now be expected every 20 years in the current climate according to a recent World Weather Attribution study. That has deep implications for ETF investors tracking the climate change theme.

The study was conducted by scientists from France, the Netherlands, India, Switzerland, the U.K., and the U.S. The study found that human-made climate impacts make such devastating droughts 20 times more likely now. Europe recorded its worst drought in 500 years, the western United States suffered extreme drought conditions not seen in 1,200 years, and China’s longest river, the Yangtze, recorded its lowest levels since 1865.

Such droughts would only occur once every 400 years in a world without climate change, but in a world where humans have greatly increased the rate of warming, such occurrences are now much more frequent and much worse. In Europe, scientists estimate that climate change made the drought three to four times more severe than it would have been otherwise.

“The models analyzed also show that soil moisture drought will continue to increase with additional global warming, which is consistent with projected long-term trends in climate models as reported,” warned the authors.

Spiraling weather conditions have already led to extensive wildfires this year, causing significant crop losses in some regions and adding to food price pressures globally in a macro environment of already high global inflation and supply chain issues. As these weather events become more common and more disruptive, the costs will only increase across the economic and humanitarian spectrum.

Investing for Change With KraneShares

Increasing direct climate impacts are driving governments and individuals to become more aggressive on climate initiatives. California’s governor has recently passed a more stringent timeline for the transition to net zero for the state. While Europe contends with an energy crisis, the EU remains committed to a net-zero goal by 2050.

KraneShares also offers the first U.S. ETF exposure to the voluntary carbon offset markets through the KraneShares Global Carbon Offset Strategy ETF (KSET), as well as the KraneShares Global Carbon Transformation ETF (KGHG) which seeks to capture the true potential within the carbon transition by focusing on companies from within industries that are traditionally some of the highest emission offenders but that are on the precipice of transitioning to renewable technologies.