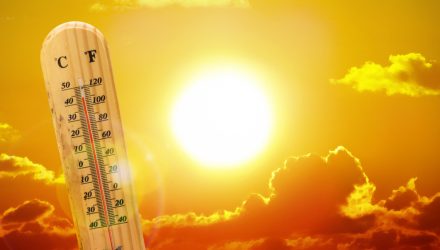 The national weather service in the United Kingdom issued a red warning for extreme heat on Monday with a 50% chance of temperatures soaring over 104° Fahrenheit (40° Celcius), higher than the previous heat record set in 2019. It’s all part of a warming world and increasingly intense weather events that will have larger impacts on populations and infrastructure. It also comes at a time when the U.K. is already grappling with skyrocketing energy prices.

“This is the first time we have issued a Red National Severe Weather Warning for extreme heat and the first time 40°C has been forecast in the UK,” said Professor Penny Endersby, chief executive of the Met Office, in a press release yesterday. “We have seen when climate change has driven such unprecedented severe weather events around the world that it can be difficult for us to make the best decisions because nothing in our life experiences has led us to know what to expect.”

Greater London was included in the warning, home to over 9 million people, and many services are being halted or reduced, such as trains because the London underground typically registers temperatures that are 10 degrees hotter than above ground, proving extremely dangerous for the unconditioned lines. Roads were also sanded to try and prevent melting of the road surface, reported KraneShares in their Climate Market Now blog.

The heatwave is part of a larger one that is blanketing Europe, causing heat-related deaths and wildfires in Europe, with fires also breaking out in London. The extreme heat brings direct attention to the urgency of climate change for many now enduring this unprecedented heat wave.

“The only long-term solution is dealing with carbon emissions and reducing the amount of carbon we utilize,” wrote Professor Ric Williams, chair in Ocean and Climate Science and co-lead of the University of Liverpool’s Climate Futures research, in an opinion piece for the University.

While Professor Williams believes some of the responsibility falls on individual and personal choices, the “major part of the solution is institutional and how we collectively plan our futures via local and national governments, particularly in how energy is produced and utilized, and the level of support given to how we move to a low carbon future,” said Professor Williams.

“UK carbon allowances continue to trend higher as the weather breaks records. Imagine if UK homes were all fitted with air-conditioning, they would be burning huge amounts of coal and gas to create the electricity to power these appliances,” wrote Luke Oliver, managing director, head of climate investments, head of strategy at KraneShares, in a communication to VettaFi.

“As the UK and other countries adjust to greater weather extremes, we can expect higher energy demands which will only worsen carbon emissions. While bullish carbon allowances, we hope the rising price of carbon will lead to great innovations in clean energy and create a win for both climate and investors,” Oliver explained.

The KraneShares Global Carbon ETF (NYSE: KRBN) offers the first-of-its-kind take on carbon credits trading and is in a position to capture the rise in carbon allowance prices as emissions limits become more stringent globally and countries tackle both the carbon and energy crisis. The fund also offers access to the United Kingdom Allowance program.

KRBN carries an expense ratio of 0.78% and has nearly $1.1 billion in net assets.

The KraneShares Global Carbon Transformation ETF (KGHG) seeks to capture the true potential within the carbon transition by focusing on companies from within industries that are traditionally some of the highest emission offenders but that are on the precipice of transitioning to renewable technologies. These companies that are set to disrupt their industries would benefit greatly from being leaders in the transition, as the cost of carbon emissions will only become more expensive, cutting into the bottom line as demand decreases for high emissions offenders.

KGHG is an actively managed fund that invests globally across market caps and sectors in carbon emissions reducers that are taking active steps to reduce their carbon footprints and services or the carbon footprints of other companies. KGHG has an expense ratio of 0.89%.