How to Invest in Europe’s Energy Transition

The Russia-Ukraine war remains an ongoing humanitarian crisis and has had far-reaching, deep impacts, particularly within the energy sector. As much of the Western world moves to unwind from reliance on Russian oil and natural gas for the foreseeable future, Europe is doubling down on its energy transition commitments in its pivot away from Russia.

Analysts are predicting that this transition will bring about “a super-cycle of capital spending that is just beginning,” writes Roger Mortimer, portfolio manager of the KraneShares Global Carbon Transformation ETF (KGHG), in a recent paper.

With soaring energy costs in Europe, green technologies and alternatives have become an attractive option where once price was a sticking point. The “REPowerEU” plan that was launched in Europe on March 8 commits to greater installation and utilization of solar and wind power as well as a large call for green hydrogen.

Estimates for annual investment into this transition in Europe are approximately $185 billion, a six-fold increase of investments over the last five years. 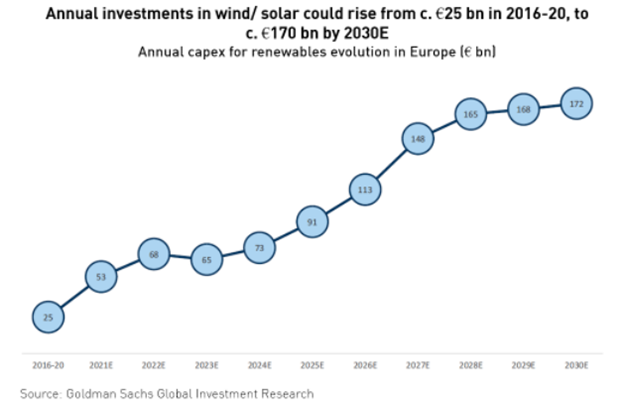 “In the multi-year rebuilding of Europe’s energy infrastructure, both legacy energy producers and renewable companies can win – and the objectives of energy security and energy transition can co-exist,” Mortimer explains. “The transition period will be marked by persistent high energy prices – benefiting the incumbent fossil-based players, but also enhancing the relative economics of renewable-based systems, expediting their development and that of associated industries like green steel.”

Companies that KGHG invests in include RWE, a German electric utility (held at a 3.02% weight in the fund) that is positioned to potentially benefit from the increased spending. RWE has plans to invest nearly $33 billion to triple its capacity by 2030, with Goldman Sachs estimating that its earnings potential will be double that of other European utilities’ averages in the next five years.

Skyrocketing energy costs are going to have very real impacts on industries and the spending power of consumers, creating an even greater sense of urgency from multiple fronts for European leaders to transition from Russian energy reliance to greener alternatives.

“Europe’s urgent necessity for energy independence is also the catalyst that should trigger a global acceleration of the energy transition, allowing leading decarbonization players and processes to scale faster, driving costs down,” Mortimer writes. “This is a game-changer for the energy transition, as reaching cost parity faster will likely speed global adoption.”

The KraneShares Global Carbon Transformation ETF (KGHG), which launched last month, seeks to capture the true potential within the carbon transition by focusing on companies from within industries that are traditionally some of the highest emission offenders but that are on the precipice of transitioning to renewable technologies. These companies that are set to disrupt their industries would benefit greatly from being leaders in the transition, as the cost of carbon emissions will only become more expensive, cutting into the bottom line as demand decreases for high emissions offenders.

“KGHG is invested in the industries and companies that are critical to putting domestic energy supply in place. These industries should see unprecedented demand for their services as Europe races to establish energy independence,” Mortimer writes. “They include renewable generation and areas such as green hydrogen, where the EU has pledged to more than triple the previous import target.”

KGHG is an actively managed fund that invests globally across market caps and sectors in carbon emissions reducers that are taking active steps to reduce their own carbon footprints or the carbon footprints of other companies. This also includes companies within the supply chain of the carbon-reducing companies and companies that are growing their businesses with others that are materially reducing carbon emissions. The fund carries an expense ratio of 0.89%.