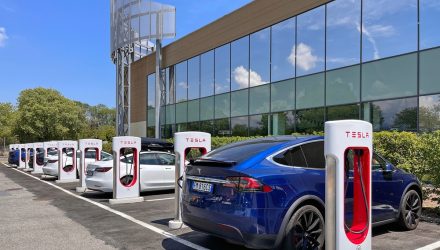 Every Tesla Model In Top 10 Greenest EVs in U.S.

Bloomberg recently released their Bloomberg Green’s Electric Car Ratings that ranked the top electric vehicles in the U.S. for 2022, with Tesla having every one of its models included in the top 10.

The rankings are based on the Bloomberg Green rating, a methodology formulated as a collaboration between Atlas Public Policy, BloombergNEF, and the Union of Concerned Scientists. It simplifies comparisons by measuring two metrics: battery size and driving economy. Bloomberg recognizes that measuring the true and full impact of each vehicle is an exercise of astronomical complexity, but creating a more simplified system would make it easier to compare existing EVs and quickly assess new models being released.

The driving economy portion measures how efficiently and far an EV can travel on the road while battery size is a stand-in for measuring the carbon cost to manufacture the vehicle — lithium is the main component of almost all EV batteries to date and mining lithium is a resource-intensive and emission heavy practice. The score is weighted so that 70% is represented by the driving economy and 30% accounts for the battery size as a proxy for the car’s carbon cost.

This year the Lucid Air ranked number one in the U.S. with a green rating of 71.1, followed by the Tesla Model 3, and the Tesla Model S in third place. The newer EV truck models came in last due in large part to their increased weight. In all, there were 34 EVs ranked. 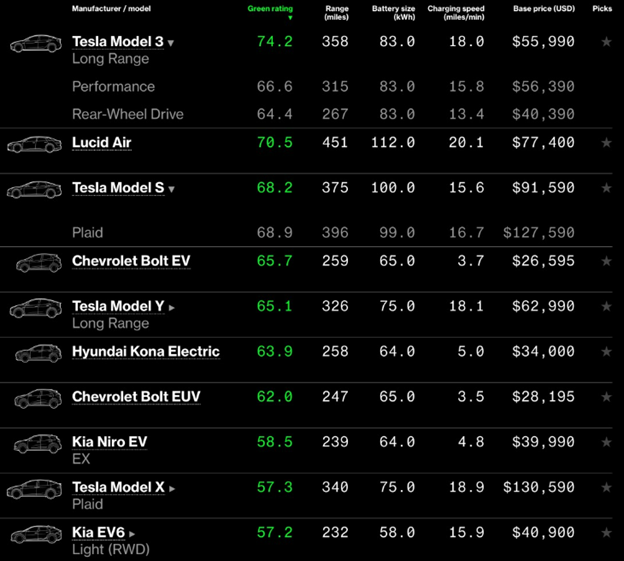 Investing in Tesla and EV Growth

KARS invests in many familiar car companies such as GM, Tesla, Ford, Mercedes-Benz, BMW, and major Chinese EV manufacturers such as Li Auto, Nio, and BYD, some of the biggest companies in the global electric vehicle industry.

Tesla is carried within the fund at a 3.86% weight and is the fourth-largest holding of KARS.