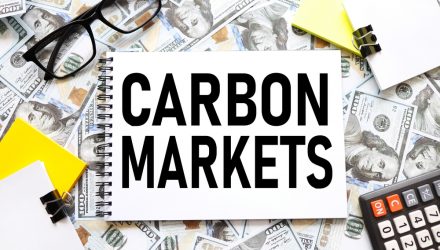 An Advisor’s Guide to U.S. Carbon Markets Heading Into Q4

The annual United Nations General Assembly concluded last week in New York as leaders from around the world met to discuss a range of topics in person for the first time since the onset of the pandemic. Alongside the General Assembly was New York City’s Climate Week which played host to a gathering of global leaders from businesses, government, and civilian life with a focus on global warming and climate initiatives and carbon markets were a central part of discussions.

KraneShares was present for Climate Week NYC, with Luke Oliver, managing director, head of climate investments, and head of strategy at KraneShares, featured at speaking engagements at both the S&P Sustainable1 event and the Sustainable Investment Forum.

“Both events highlighted the need for urgent action across asset classes and, most importantly, that government policy needs to be accelerated. As you can imagine, global carbon markets were central to these discussions as they represent the perfect marriage of regulation and capital markets,” Oliver wrote on the Climate Market Now blog.

California’s Carbon Market in Q4 and Ahead

Carbon markets have been impacted by the macro environment this year in a market space already known for its volatility. That said, the California carbon market received new, positive underlying support from an Air Resources Board (ARB) official that the state would tighten its carbon markets to align with the updated 50% cut in emissions by 2030.

“Raising the target, coupled with several recently passed climate bills, reinforces the state’s adherence to increasing the ambition of its climate mitigation efforts. Tightening emission targets is constructive for the market’s long-term price growth. We will see allowance supply shrinking as industries work to keep pace with the new parameters,” explained Oliver.

Bloomberg New Energy Finance has also updated its supply estimates that will see California Carbon Allowances (CCAs) shifting from a surplus to a deficit by 2030. Aggregate demand is estimated to grow to 4 billion tons by 2030 with the aggregate supply of CCAs at 2.5 billion tons over the same period.

RGGI’s Market in Q4 and Ahead

The Regional Greenhouse Gas Initiative (RGGI) market that comprises states from the Northeast U.S. is trending to be short about 8 million allowances by the end of this year after ending last year with a surplus of 87 million.

Power generators within RGGI would need to have a hedging ratio of 50% for the remainder of this year through 2024 to operate a tight market for Regional Greenhouse Allowances (RGAs). According to BNEF analysts, under current parameters RGGI is set to create an oversupply of credits by the end of the decade by about 45 million allowances, indicating that a parameter reset is needed to bring the market back into alignment looking ahead.

“RGGI’s program review deadline is currently set for December 2023, which means changes to the program will likely take effect starting in 2025. We will keep watch of any updates to the RGGI program as they’re announced,” wrote Oliver.

Investing in CCAs and RGAs with KraneShares

The KraneShares California Carbon Allowance ETF (KCCA) offers targeted exposure to the joint California and Quebec carbon allowance markets which will benefit from legislation that works to curb emissions more aggressively in the state.

The KraneShares Global Carbon ETF (NYSE: KRBN) was the first-of-its-kind take on carbon credits trading and is in a position to capture the rise in carbon allowance prices globally as emissions limits become more stringent, including within the RGGI market.