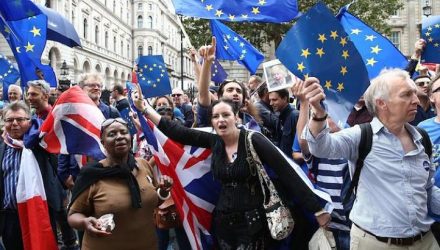 One year ago, British voters cast their ballots in favor of leaving the 28-member European Union, defying multiple opinion polls leading up to the Brexit referendum that said the “remain” camp would notch a narrow victory.

In a pre-Brexit Frank Talk last year, I wrote that Brexit would be regarded as the most consequential political event of 2016. President Donald Trump’s surprise election notwithstanding, I stand by my earlier comment.

Brexit, in fact, laid the groundwork for Trump.

Both movements, described by many observers as populist and nationalistic, exposed an impatience and frustration with rampant bureaucracy, strangulating regulations, lax border security, political correctness and a sense of a loss of autonomy. “Take our country back!” and “We want our country back!” were the battle cries of supporters of Trump and Nigel Farage, then-leader of the UK Independence Party (UKIP).

EU membership has been nothing if not costly. As I shared with you last year, the U.K. is the third-largest net contributor to the Brussels-based bloc after Germany and France, paying the equivalent of between $11 billion and $14 billion every year. On top of that, the 100 most expensive EU regulations, passed down by unelected officials, are estimated to cost somewhere in the vicinity of 33.3 billion pounds, or $49 billion.