You are at:Home»Equity ETFs»A Brazilian ETF Bounce as Equities Surge 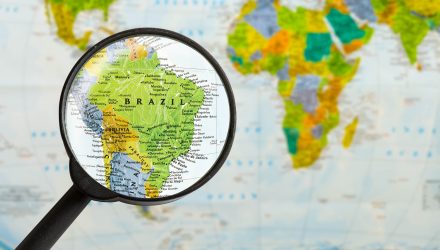 Some market observers believe there is still upside to be had with EWZ and Brazilian stocks. Last year, EWZ trailed the widely followed emerging markets benchmark. Surging commodities prices, thanks to a weak dollar, are among the catalysts boosting Brazilian equities early in 2018.

“Selling pressure over the last few weeks has shaved roughly 10% off of EWZ’s share price, but the ETF looks to be finding a bottom. A breakout above $44.2 would be significant due to its recent consolidation pattern. Global equities look to be recovering, and with it, EWZ could potentially show relative leadership due to its economic fundamentals,” according to a Seeking Alpha analysis of EWZ.