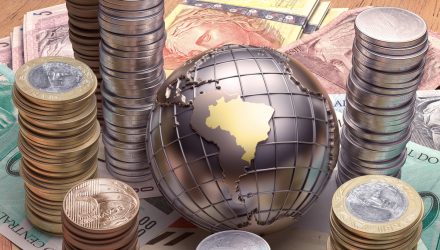 Brazil country-specific exchange traded funds surged Thursday after the Central Bank of Brazil stated its intent to increase support of the real currency and Goldman Sachs argued that this emerging market was a prime cheap opportunity.

Central bank President Roberto Campos Neto stated that the bank would dip into its large pool of foreign exchange reserves and continue intervening in the currency market if required to support the battered real currency, which has plunged 30% against the dollar so far this year, Reuters reports.

Further adding to the momentum in the Brazil ETFs on Thursday, Goldman Sachs was bullish on the world’s hardest-hit equity market, Bloomberg reports.

“Brazilian equities are an ideal bounce-back candidate,” the strategists said in a note.

Brazilian stocks are down more than 48% when measured in the U.S. dollar. Goldman Sachs strategists led by Kamakshya Trivedi, though, argued that Brazilian stocks will benefit from increased demand for risky assets and a rebound in commodities prices over the second half of the year

“We think Latin America offers the most value in EM equities – Bovespa likely the best rebound candidate,” Goldman Sachs strategists said in a note. “Latin America’s underperformance versus the rest of EM since January has opened up significant value across assets on both a relative and an absolute basis.”

Investors have dumped Brazilian stocks and its currency this year after the coronavirus or Covid-19 pandemic dragged on the economy and worsened the country’s already-weak fiscal outlook. Furthermore, Brazilian markets have further sold off after a round of political turbulence and a lack of confidence in President Jair Bolsonaro, who downplayed the coronavirus threat even as Brazil suffers through a surge in new infections.