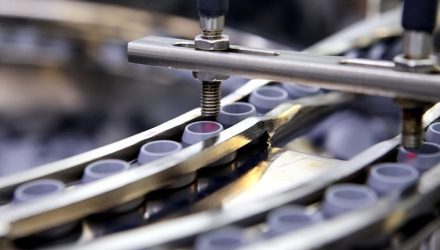 The iShares Nasdaq Biotechnology ETF (NASDAQGM:IBB), the largest biotechnology exchange traded fund by assets, is up more than 11% over just the past month. Resurgent biotechnology stocks and ETFs have been fueled by fundamental and political factors, but some technicians see the move as having more upside.

Investors are growing more bullish on the sector as a Republican-led Congress and administration could enact reforms to free cash held overseas for tax reason by large U.S. pharmaceutical companies, which could pave the way for increased acquisitions in the sector. The White House is also looking to help the Food and Drug Administration (FDA) expedite new drug approvals, which could serve as a major catalyst for the biotechnology space.

“For example, biotech and pharmaceutical stocks are currently among the darlings of Wall Street. However, folks may forget that if we rewind to last fall, they were the whipping boys. However, in the midst of their bloodbaths then, we were able to identify some objective levels on their charts which we felt had a good chance to stop the bleeding. Indeed, those levels set the foundation for the rallies currently at hand,” reports ETF Daily News.

Healthcare stocks and the corresponding exchange traded funds continue to spend time in the spotlight as the Republican-controlled Congress moves to replace the Affordable Care Act, also known as Obamacare.

Healthcare stocks are also showing attractive valuations relative to other defensive sectors, which are richly valued.