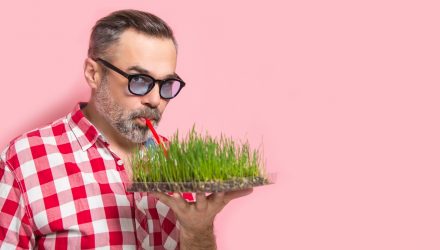 Despite the sea of red that is currently surrounding the markets today, there is one stock that is weathering the storm surrounding the trade war quite well: Beyond Meat (BYND).

As the name implies, the company has a largely ethical focus and mission.

“As a young adult, I enjoyed a career in clean energy but continued to wrestle with a question born of these early days: do we need animals to produce meat?” asks Brown, who is chief executive as well as founder of Beyond Meat, in a letter included in the prospectus.

Beyond Meat is not the only company interested in furthering vegan and vegetarian interests. Impossible Foods, which makes a meatless plant-based burger and is backed by celebrities like Serena Williams and Katy Perry, said on Monday it has raised $300 million in the latest round of funding ahead of a possible initial public offering.

The latest round for Impossible Foods brings the Silicon Valley-based startup’s total raised to more than $750 million. Nevertheless, regardless of seeing encouraging signs from investors, Impossible Foods is not in a hurry to go public, Chief Financial Officer David Lee told Reuters.

“We believe in self-reliance. Being ready to go public is a priority for the company because we need to be operating at the highest level of rigor,” Lee said.

“But we are not in a rush, nor are we announcing an IPO filing.”

The rise in conscious eating is already spurring interests in creating ETFs like a proposed Vegan Climate Exchange Traded Fund.