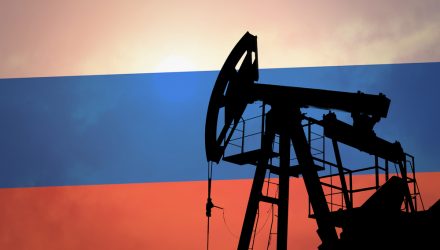 Russian equities tend to soar when oil prices do the same, and that scenario is repeating itself in 2021.

With Brent crude, the global benchmark, shooting higher, the VanEck Vectors Russia ETF (RSX) is up nearly 20%. Russia isn’t a member of the Organization of Petroleum Countries (OPEC), but it’s one of the largest oil producers outside the cartel and its domestic equity market is reflective of that status. RSX, the original Russia exchange traded fund, allocates a third of its weight to the energy sector.

With Brent crude prices recently surpassing $70 a barrel, the highest levels in more than two years, more upside could be available for RSX as earnings quality improves for its components.

“Demand for oil products and gas reflects the new reality as economic activities are increasing globally. The Russian fossil fuel sector is taking advantage of the changing tide as energy prices are rising again. Earnings in the first 3 months of this year are up by 11-23 percent compared to this time last year,” writes Vanand Meliksetian for OilPrice.com.

The Right Time for RSX?

Amid the 2020 coronavirus oil bear market, many U.S. shale producers and European oil majors scaled big on output as a means of conserving capital. While that prudence has largely been rewarded this year as energy has been the best-performing sector in the S&P 500, domestic exploration and production companies that cut production in 2020 need time to ramp up output to take advantage of higher prices.

As part of a previously reached agreement, OPEC+ countries, of which Russia is one, were permitted to gradually boost output this year through July.

In addition to rising oil prices and earnings per share increases ranging from the low double digits to the mid-20s, RSX energy components have another tailwind: the weak ruble.

“Geopolitical tensions and economic fundamentals have affected the value of the Russian currency compared to the dollar which is usually used in international oil transactions,” according to OilPrice.com. “The current situation is favorable for the Russian oil sector as most sales are still executed in dollars while operating costs are settled in rubles.”

Helped by dividends lobbed off by energy companies, RSX yields 3.15%, 170 basis points ahead of the dividend yield on the MSCI Emerging Markets Index.