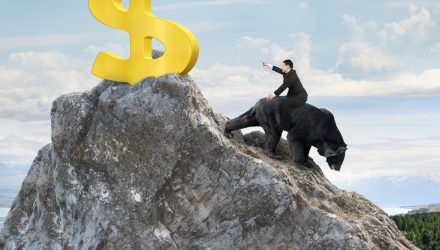 After a punishing first half of the year for the stock markets, traders continued to ramp up bets against equities. Exchange traded fund investors can also hedge against further market risks with bearish or inverse strategies.

According to JPMorgan Chase & Co.’s analysis of futures tracking major stock indexes, asset managers and hedge funds raised bets against U.S. stocks to the highest level since 2016 on fears over a global slowdown, the Wall Street Journal reported.

Additionally, according to a survey by the National Association of Active Investment Managers, the average active investor pared back stock exposure this year and reduced equity allocations to the lowest levels since the start of the COVID-19 pandemic.

Meanwhile, many market observers have raised bets that the Federal Reserve will hike interest rates by a full percentage point at the next meeting, something that hasn’t happened in decades, which further added to the belief that policymakers would drag the economy into a slowdown.

According to Deutsche Bank estimates, investors have now steadily diminished their exposure to stocks to some of the lowest levels of the past 12 years. In addition, bullish bets in the options market among traders slipped to the lowest level since April 2020.

“We’ve now determined that it’s better to be slightly short rather than long,” Martin Bergin, president at Dunn Capital Management, told the WSJ. “If there’s a bounce, we’ll start to take on more long exposure.”