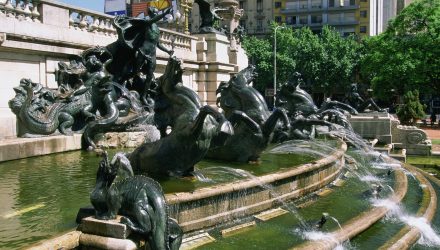 On Monday, the Global X MSCI Argentina ETF (NYSEArca: ARGT) was up 1.6% and the iShares MSCI Argentina and Global Exposure ETF (BATS: AGT) was 1.5% higher. Nevertheless, ARGT and AGT both declined 28.5% so far this year.

Supporting the rebound in Argentina’s market, the downtrodden peso currency appreciated and the risk of its bonds defaulting improved slightly as the budget bill and reworked IMF deal grow closer to being announced, Reuters reports.

The peso currency had depreciated over one-half of its value against the U.S. dollar this year to ARS39.5491 to the USD as traders grew dispirited over Argentina’s ability to repay 2019 debts.

Bolstering investor confidence, President Mauricio Macri’s 2019 budget bill to be released later Monday, potentially outlining new taxes and spending cuts the government plans for restoring fiscal balance. The details have been negotiated with the IMF, which is revamping its $50 billion standby financing deal by the government improving its fiscal goals.

The JPMorgan Emerging Markets Bond Index Plus (EMBI+), which measures the perceived likelihood of defaults against U.S. Treasuries, showed spreads lowered over Treasuries, indicating a rise in market confidence in Argentina’s ability to payback its debt obligations.