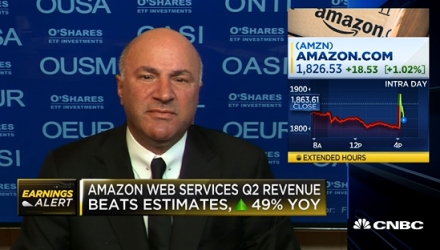 Amazon got a 0.51% bump Friday as the online retail company reported its second-quarter earnings on Thursday, delivering better-than-expected earnings of $5.07 earnings pre share as opposed to the consensus estimates of $2.50 EPS.

Amazon attributed much of its growth to its high-margin business operations, such as its cloud computing service, which contributed to its operating income of $1.6 billion. However, Canadian businessman and television personality Kevin O’Leary was quick to pinpoint that Amazon will face stiff competition moving forward as other tech companies enter the cloud computing space or enhance their existing services.

“There’s a lot of competition coming into cloud services and AI (artificial intelligence) and all kinds of support,” said O’Leary. “In the same way we got euphoric about Facebook, you have to come in with some caution to the fact they’re not the only player in town providing these services.”

Amazon did miss on revenue, posting $52.9 billion versus analyst expectations of $53.41 billion, but that figure didn’t negatively impact its stock price as it was up as much as 3.6% following the earnings report. This is in stark contrast to what happened with Facebook as the company posted its worst trading day ever on Thursday after reporting mixed results.