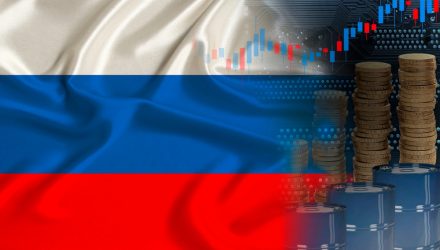 Oil ETFs Swing as Russian Troops Pull Back From Kyiv

Oil-related exchange traded funds rebounded on Tuesday despite initially falling off in response to Russia’s statements that it will pull back from Kyiv in Ukraine.

WTI crude oil futures plunged as much as 7% to below $100 per barrel early on Tuesday while Brent, the world benchmark, declined as much as 7% to just under $105 per barrel. However, both contracts later pared losses, indicating that the energy markets remained uncertain over the next phase in the Russia-Ukraine war, CNN reports.

Energy markets retreated following signs of progress in peace talks between Russia and Ukraine on Tuesday, with Moscow stating that it would “drastically reduce” its military presence in the Ukrainian cities of Kyiv and Chernihiv.

A Russian official said that the military pullbacks are part of an effort to “increase mutual trust and create the necessary conditions for further negotiation,” according to RIA.

“I wouldn’t say peace is breaking out, but there’s a glimmer of hope, apparently,” Robert Yawger, vice president of energy futures at Mizuho Securities, told CNN.

Andy Lipow, president of Lipow Oil Associates, argued that the market has interpreted the updates on the Russia-Ukraine negotiations as a “step towards a ceasefire.”

Nevertheless, market observers remain wary of statements out of Moscow, turning to the old Russian proverb “trust, but verify.” The U.S. government has warned that this could be a redeployment of troops and not a definitive withdrawal.

“You could easily take this all to mean Russia is just pulling back to regroup and give it another shot,” Yawger added. “I wouldn’t trust them.”

Energy markets have been swinging on developments in Russia, notably Western sanctions that have more or less hobbled Russian energy exports.

“I expect sanctions and the oil industry’s desire to move away from Russian supplies will be with us for decades,” Lipow added.