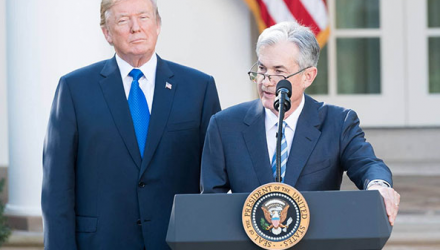 With interest rates continuing to creep up, there’s a changing of the guard at the Federal Reserve. In my travels and during conferences, I’ve spoken with many fixed-income investors who wonder how they can best prepare for the uncertainty these changes might bring. I’ll share my favorite idea below, but first, a few words on the new head of the Fed, Jerome Powell.

The U.S. Senate voted in January to confirm Powell as the next chair of the U.S. central bank, and I don’t believe I’m alone in seeing his appointment as a political compromise. Although he has vowed to stay the course with former chair Janet Yellen’s cautious rate hikes—something President Donald Trump was in favor of—Powell is a skeptic of financial regulations.

To be clear, he’s expressed approval for some of the Fed’s oversight of the financial market, but he’s also pointed to areas where he thinks regulation may have become too burdensome—especially to small regional and community banks. In his November confirmation hearing, he said he supported “tailoring” regulations to fit the institution.

This is a welcome and refreshing change in thinking. If you recall, during one of her final speeches at the Jackson Hole symposium in August, Yellen defended the strict, broad-based financial regulations put in place after the financial crisis—Dodd-Frank included. But as I shared with you this week, Congress and President Donald Trump are now working to roll back many of the provisions of the mammoth 2010 financial reform law.