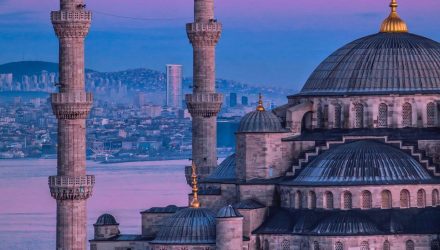 Should U.S. Investors Worry About Turkey?

Turkish assets have been under severe pressure, with the Turkish lira depreciating by 42% against the U.S. dollar this year, down 22% this week alone. In addition, year-to-date, local equities are down 19% and the 10 year USD government bond yield is up 309 bps to 8.4% since January 23, 2018, the earliest available trading date this year.

The Turkish economy is finding itself in the midst of a perfect storm, in the following ways:

Turkey represents only 0.6% of the MSCI Emerging Markets index and 5.9% of the J.P. Morgan Emerging Market Bond Index Global, thus U.S. investor exposure to Turkey is likely limited, especially on the equity side. Crucially, other EM countries are in a much better position to weather this moment of negative investor sentiment towards the EM asset class. In aggregate, EM countries run a very small current account deficit of -0.1% of GDP, have only 8% of their total government debt in foreign currency, and have inflation rates at or near central bank targets. As a result, investors should remember that Turkey is not representative of the rest of the EM universe.