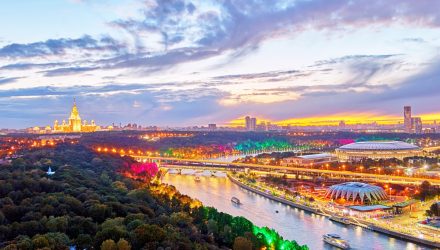 The rouble has depreciated 13.4% against the U.S. dollar and was trading around RUB66.59 against the USD after hitting RUB69 compared to RUB62 in early August.

The amount of foreign currency that retail clients held in Sberbank slipped by $1.1 billion in August to $33 billion while the bank’s corporate forex deposits diminished by $2.2 billion to $55 billion.

Investors who are wary of the potential negative effects U.S. sanctions may have on the Russian economy could look to an inverse or bearish ETF bet to hedge downside risks. Specifically, the Direxion Daily Russia Bear 3x Shares (NYSEArca: RUSS) looks to deliver triple the daily inverse returns of the same index tracked by RSX.

For more news on Russia, visit our Russia category.